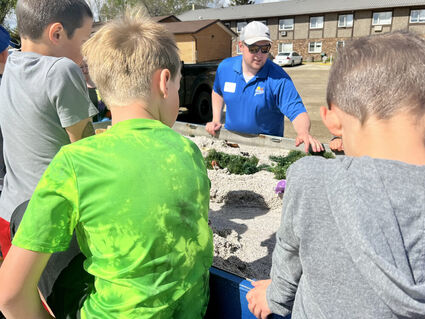 CHESTER - Nearly 40 kids learned about agriculture and natural resources during a daylong camp sponsored in part by Montana Farmers Union held in Chester Monday, May 31.

The Farmers Union Day Camp schedule was packed with activities and workshops focused on agriculture, natural resources and cooperatives, and correlated with two of MFU's main priorities – education and cooperation.

"I really try to see what I can find locally that I can have somebody come in and teach or show," said Charlotte Kelly, who organizes the event.

The program also serves to introduce the kids to MFU's summer camp programs at Arrowpeak Lodge in Highwood. 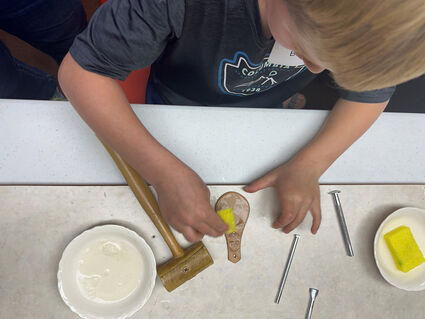 Children learned about leather stamping Monday in Chester at one of the stations at the Montana Farmers Union day camp.

"They have fun here and they can have even more fun at Arrowpeak," Kelly said, adding her children enjoyed both the day camps and the longer camps and remain involved in MFU.

"If you talk to my boys, it's like a whole 'nother family. They love it," she said.

James Van Spyk attended Arrow Peak camps and Tuesday the college student, who is working as an advisor at the camp facility this summer, taught the kids about cooperatives.

Campers were surprised to learn how many different businesses can be cooperatives, and the ideas that each member gets a vote and that you're stronger as a team resonated with them, Van Spyk said.

Hopefully, they took away a better understanding of how cooperatives work overall, he added.

Ultimately, having a camp that connects children to agriculture is worth the effort of coordinating the day, Kelly said.

"I think it's a great program," she added.