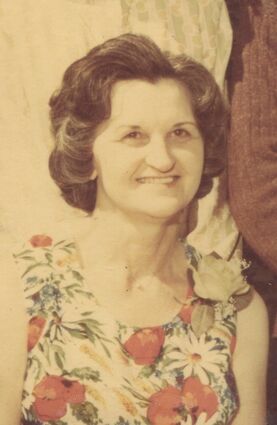 Cremation has taken place, and a memorial Mass will be held at 11:00 a.m. on Friday, June 24, 2022, at St. Jude Thaddeus Catholic Church. Burial will follow in the Calvary Cemetery.

Please visit Dorothy's online memorial page to send a card or leave a message of condolence for her family at http://www.hollandbonine.com .

Dorothy was born December 9, 1923, in Goldstone, MT, to Andrew and Elizabeth Schaller, who homesteaded in north-central Montana having immigrated to the USA from the German settlement in Odessa, Russia, where they were fleeing from the war. Dorothy worked on the farm growing up. In her younger days she enjoyed the Fourth of July, dances, and special events at the Goldstone Community Center. She graduated from Havre High School in 1941.

After high school, Dorothy married, and the couple had a son. In 1951, Dorothy's son Glenny died while playing in a grain bin when it collapse. After his death, the couple divorced.

Dorothy married Charles "Charlie" Carbone on March 17, 1961. Charlie was the railroad station master in Havre, MT. In 1975, Charlie was transferred to Seattle to be a trainer for the railroad employees. After about year, he quit his railroad job which he no longer enjoyed, and the couple retired in the now Lake City area of Seattle. Due to Charlie's job with the railroad, they had free railroad travel for life. Charlie and Dorothy would spend endless time planning their two-week vacation on a railroad tour of various areas of the USA, in addition to foreign travel.

Charlie died suddenly of a massive heart attack in September of 1978. Dorothy had established a life in the Seattle area and chose to stay in the area. She was involved in bowling, and playing bridge had theater tickets, and lots of friends. She was raised in the Catholic faith and continued to be involved in her church. Dorothy was still able to travel on the railroad and took trips to see her sister in Montana and visit other family members in other states when she chose.

She moved her mother to live in her condo due to her mother's early stages of Alzheimer's, and she cared for her mother until she needed more care than Dorothy could provide. At that time Dorothy moved her mother to Columbia Nursing Home, and continued to visit her several times each week until she passed in 1998. When Dorothy had to move her mother to a care facility, she elected to move herself to a retirement community which had assisted living attached. She made the move in 1996 to Northhaven Retirement and Assisted Living, where she continued to live until her death. She played bridge, had a pea patch, and was very involved with the Northhaven community. Due to failing memory, in 2016 she moved to the assisted living portion of Northhaven. She lived there, where she had three meals per day and assistance with daily living as needed. The staff really liked her, and she received excellent care.

Dorothy was preceded in death by her son, Glenny Harder; husband, Charlie Carbone; parents, and all of her siblings.

She is survived by her many nieces and nephews, who adored her, and her many friends in Seattle.