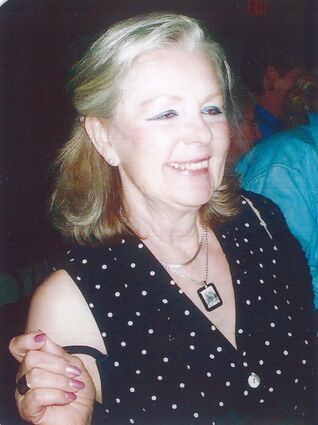 Inga Goebel departed from this life May 24, 2022, to rest with the love of her life, John, for eternity.

Inga's first nine years were in Sudetenland, the home of her ancestors for over 1,000 years.

At the end of WWII all German speaking people were driven out or killed as the Russians took over the country. Our family was blessed and survived enduring many hardships along the way, ending as refugees in Bavaria.

Inga spent her early teenage years with the Franciscan nuns at the Marianum in Munich. In early 1952 the family immigrated to Montana - America, the land of opportunities!

At St Jude's we were happy to find the Franciscans teaching at Havre Central High School. Inga graduated in 1954. While attending school Inga worked as a nurse's aid at Sacred Heart Hospital. Later Inga was a bookkeeper at the H. Earl Clack Co. until they merged with Husky Oil. The main office was in Cody, WY. Inga was offered a job transfer but decided to stay in Havre.

She accepted a job at the Montana National Bank. Inga was always into the arts, she had many hobbies including making Xmas gifts for all. So when she heard about Adult Ed classes she signed up for leather craft. What fun! The handsome teacher turned out to be her "prince charming." Inga made many beautiful gifts for Xmas including belts for her brothers and father with their names tooled on.

Inga and John were married in June 1955 and lived happily ever after for 58 years! As the children came along the family lived in the same house on Beaver Creek Boulevard. Inga and John enjoyed being involved with their children with Boy Scouts, Girl Scouts, camping and canoeing.

Inga's best hobby was taking pictures and later videotaping everything! The scrapbooks of events were tooled in leather. She liked to design her own patterns. Another hobby was reading and writing stories and poems in German and English. Many were published in her hometown magazine "The Niklasdorfer Heimat Bote" which was started by the priest to keep in touch with his former parish back in Sudetenland, the country that is no longer, and the language is dying out. Inga is proud to be a legal citizen of her chosen country - the USA.

John retired from Northern Montana College after 35 years, and Inga from the Northern Montana Hospital Lab. They spent most of their time at their cabin in Alkali Springs with their children and grandchildren. Hiking, camping and skiing in the Bear Paws. They also took trips to Essex, Germany, Austria, Italy and Hawaii - to visit friends and family.