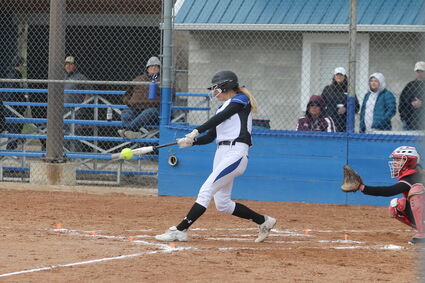 Havre's Avery Carlson hits the ball at Sixth Avenue Memorial Field last month. After a year that saw the Havre High softball team win the Northeast A Divisional title, Carlson and three other Blue Ponies were named to the all-state team and seven Ponies were named all-conference.

With another season of high school softball over, it is now time to recognize the best players on the diamond this past spring. After a season that featured the first Northeast A Divisional title, the Havre High softball team was well represented on the all-state and all-conference teams to end the season.

On the Class A All-State team, Avery Carlson, Molly Huse, Alyssa Oliver and Lizzi Haney represented the Blue Ponies. Carlson played on both sides of the plate this season for the Ponies. At the plate, she was second on the team with a .507 batting average and led the Ponies with a .630...