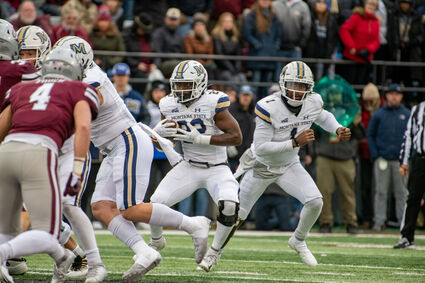 Isaiah Ifanse and the Montana State Bobcats are ranked No. 4 in the Athlon Sports Preseason Top 25.

The Big Sky Conference football season is still a ways off, but already, some of the most important preseason polls are being released, and in those polls, the Montana Grizzlies and Montana State Bobcats are getting plenty of respect.

Athlon Sports, major college football publication, recently announced its 2022 Athlon Sports FCS preseason poll, where the Griz and Bobcats are both in the top five.

Montana, which went to the FCS quarterfinals a season ago but hasn't won a Big Sky championship since 2009, was picked No. 3 in the Athlon poll, while the Bobcats, which finished second in the Big Sky a year ago but also reached the FCS championship game, was picked right behind the Griz at No. 4.

The Cats return All-American running back Isaiah Ifanse and sophomore quarterback Tommy Mellott on offense, while star linebacker Callahan O'Reilly is set to lead the MSU defense this season.

The Grizzlies have two of the best defensive players in the nation in linebacker Pat O'Connell and corner Justin Ford, while they'll get back running back Marcus Knight on offense, as well as a host of wide receivers.

Both teams of course, are expected to contend for a Big Sky championship this coming season, but it won't be easy with a loaded conference.

Defending league champion Sacramento State is picked sixth in the Athlon poll, while Weber State is picked 13th and Eastern Washington was picked 15th. The conference also features a stout team from UC Davis, while Northern Arizona should be vastly improved this fall.

The Grizzlies open their season Sept. 3 at home with a night game against Northwestern State. The Cats will host their annual Gold Rush Game Sept. 3 against McNeese State.