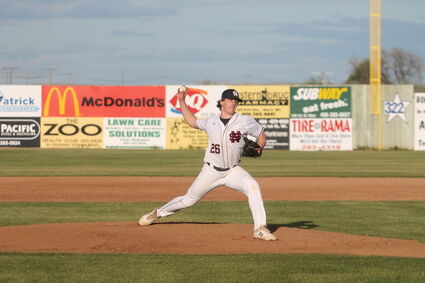 Havre's Brody Nanini pitches during an American Legion baseball game last month at Legion Field. Nanini is a standout pitcher for the Northstars, as well as one of their top hitters. He's also getting to play alongside assistant coach and step dad Jake Eldridge.

With summer arriving on the Hi-Line, it is time for the Havre Northstars American Legion baseball club to head into the heart of their schedule. The Northstars have had their bumps to start the year, but they have the athletes to roll through the summer and into the postseason.

One of those players is Brody Nanini, who will look to make an impact while also working with his stepfather Jake Eldridge, an assistant coach for the Northstars. While many young athletes could be intimidated by this situation, Nanini has enjoyed the opportunity.

"It's been really great," Nanini said. "He pushes me really hard and pushes everyone really hard."

Once the baseball season comes to an end later this summer, Nanini and Eldridge will stick together for another season, Havre High football season, that is. Earlier this year, Eldridge was named the new head coach for the Havre High football team. He will now get to coach Nanini even more, who plays tight end and outside linebacker for the Blue Ponies.

But before then, Nanini and Eldridge will be looking to help the Northstars find their stride. The Northstars have a 9-11 record early in the season, but Nanini expects himself and his teammates to play hard and try to get better in time for the postseason late in July.

While the Northstars have had their struggles, Nanini has been solid in their lineup early this summer. He leads the team with a .413 batting average, a .532 on-base percentage and 17 RBIs. He is also second on the team with 21 runs scored this season.

He has also been reliable on the mound so far this season. He leads the team with 39 innings pitched this season while also recording a 3.231 ERA and 32 strikeouts compared to 11 walks. However, he has only amassed a 2-3 record in his six games started this season. With the season he is having for the Northstars, Nanini credits two things.

"I just listen to my coaches and I just work hard," Nanini said.

Nanini and the Northstars hope to get on track this weekend with the Gallatin Valley Tournament in Three Forks. Before the Northstars head off, the Havre Daily News got the chance to ask Nanini five questions.

HDN: What have you learned about baseball from your Jake?

Nanini: "He taught me how to swing a bat when I was super young so I just learned a lot from him my whole life and he's learning as we're going too."

HDN: What do you look forward to about your stepfather becoming the new HHS football coach?

Nanini: "I'm really excited. He says he's a better football coach than he is a baseball coach so I'm excited to see if that's true."

HDN: What do you enjoy more: pitching or batting?

Nanini: "Pitching. It's just nice being able to control the game the whole time. You're in control of everything."

HDN: Do you have a favorite memory involving baseball?

Nanini: "Just all of them honestly. It's every moment. All the failures, all the successes, they're all fun for me. I'm lucky to be able to play the game."

Note: The Northstars played the Great Falls Chargers in a doubleheader on Wednesday afternoon. Due to printing press issues, those results will be in Friday's HDN sports section.