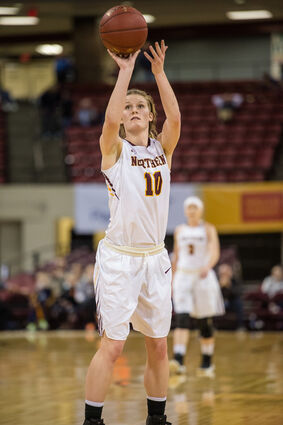 Former Montana State University-Northern All-American Natalee Faupel is one of five new individuals who will be inducted into the Northern Athletics Hall of Fame this fall.

The newest class of Hall of Fame Inductees will be a big one.

MSU-Northern Athletics will induct five individuals and two teams into their Hall of Fame in 2022. Individuals will be inducted on Friday, Sept. 2 as part of Hall of Fame Weekend. They will also be recognized during halftime festivities when the Lights host Southern Oregon in a Frontier football matchup on Sept. 3.

Davis, a native of Scio, Oregon, was a two-time NAIA National Champion and two-time NAIA All-American, winning titles in 2004 and 2005. At the 2005 NAIA Wrestling Championships, he was named the tournament's Most Outstanding Wrestler. Prior to his career at Northern, Davis finished in second and third place at the NJCAA Wrestling Championships while competing for North Idaho College. He currently lives in Plainview, Texas, where he is the head men's and women's wrestling coach at Wayland Baptist University.

Detrick, from Great Falls, Montana, was a three-time Frontier All-Conference selection for the Lights. He earned First Team honors in 2000 and 2001 and was name to the second team in 1999. In 2001, he set the single season record for quarterback sacks with 11.5, helping him garner NAIA Honorable Mention All-American honors. He currently lives in Havre, where he is the Grounds Supervisor at MSU-Northern.

Faupel, of Butte, Montana, is the all-time leading scorer in Skylights history. She is the only Skylight to be named an NAIA First Team All-American twice. She helped lead her teams to four NAIA National Tournaments, finishing in the round of 16 twice and the round of 8 once. During her career, she was named the Frontier Conference Player of the Week thirteen times. She currently lives in Havre, Montana, where she is the Director of Admissions and Recruiting.

Noble, originally from Rupert, Idaho, played for the lights from 2007 to 2009 after transferring from Walla Walls Community College. He scored over 1000 points in two seasons, and helped the Lights earn a share of the Frontier Conference title in the 2007-2008 season. He was a two-time First Team All-Conference selection, and in each of his two seasons, his teams qualified for the NAIA National Tournament. He currently resides in Boise, Idaho, where he is a physical education teacher and the head boys basketball coach at Timberline High School.

Schermele, a Great Falls, Montana native, played for the Skylights from 2007 to 2011. During her career, she amassed 1537 points, good for fourth in Skylight history. She was a three-time, First Team All-Conference selection, and earned NAIA Honorable Mention All-American honors in 2010 and 2011. For her career, she shot 84.3 percent from the free throw line, the best mark for a four-year player in Skylight history. She currently resides in Baker, Montana, where she owns and operates Rise Fitness.