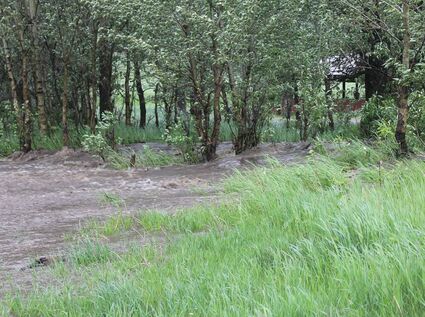 After a several-month dry spell, this region finally has seen some rain - but rain that fell fast enough to again cause flooding in the Bear Paw Mountains.

After a downpour in the mountains - Beaver Creek Park Superintendent Chad Edgar said they received more than 3 inches at Camp Kiwanis on the park and he heard more than 6 inches fell farther south - Beaver Creek burst over its banks Wednesday, flooding campsites and access roads.

The Chippewa Cree Tribe Natural Resources Department announced in a Facebook post Wednesday that the rainfall had caused a rise in all creeks. Because of that, it was declaring the closure of the Bear Paw Mountains on the reservation in both the Beaver Creek and Big Sandy Creek areas until further notice.

The post said the department will reevaluate the situation Friday and the let the public know the status of the closure.

"Until then, please refrain from going to the mountains at this time," the post said. "Only employees who are monitoring waterways and roadways will be allowed in these areas."

Tribal information officer Rusty Gopher told Havre Daily in an email this morning that the Chippewa Cree Tribe Natural Resources Department said the area will remain closed until a re-evaluation is completed today, after the printing deadline for this story passed Thursday evening.

The Chippewa Cree Tribe roads crew is assisting with blocking areas off for repair, clearing culverts and debris and filling areas with gravel and shale, Gopher added in his email Thursday.

And water deluged Beaver Creek Park, which, along with Rocky Boy, other parts of Hill County and other areas in this region, were declared federal disaster areas due to flooding in 2010, 2011 and 2013.

Edgar said the park took a pretty hard hit with flooding Wednesday, but he and his crews are out working to get roads and campsites ready for weekend recreation.

Edgar said the Lions B campground and some other smaller campsites and were hit very hard, and other sites were flooded as well.

He said at least one road is destroyed and others took damage, but the park crews are working on them.

He said the ground in the park is saturated with water and will be soft. Edgar asked that people be careful and try to avoid damaging the soft areas and respect the park and how soft it will be.

"We're doing all we can so people can come out and enjoy our little gem," he said, asking that people just be patient as they work to repair the damage and that visitors do what they can to avoid creating more damage in the soft ground.

He said the culvert to Rotary Pond and the Jaycees campground withstood the flooding, so he expects the Rotary Father's Day Fishing Derby Sunday will still occur.

But that could be impacted by weather over the weekend.

Meteorologist Christian Cassell with National Weather Service in Great Falls said Thursday it was difficult to pinpoint what areas would be hit at that time, but a weather pattern was causing increasing likelihood of storms over the weekend.

Cassell said western Montana to north-central Montana could see at least beneficial rainstorms to, at the worst, severe thunderstorms and rain that could cause flooding.

He said it looks like a severe thunderstorm warning could hit this area Saturday with thunderstorms to heavy rainfall possible Sunday.

He said the system could pass by Monday, but it was looking like it could become a Sunday and Monday event, although dryer weather is likely to follow.

The system could bring more than an inch to much of north-central Montana and 2 to 3 inches over the Bear Paws, he said.

He said the system - which, followed several months of extremely dry weather - had dropped 2.87 inches at the recording station at the Havre City-County Airport, about twice what is normal for this time of the month.

The precipitation this month is due to what is called an atmospheric river, with the jet stream off of the Pacific Ocean pushing a coridor of moisture-rich air inland.

He said that had been happening south and east of Montana, but, as typically happens, the jet stream pushed farther north as the year moved toward summer.

Last week it started pushing moisture-rich air into this area.

It has impacted much of Montana, with the same atmospheric river that brought the flood-causing rains in and around Yellowstone National Park creating the rains that hit the area last week and that caused the Beaver Creek Park flooding Wednesday.

But the moisture has been desperately needed in this area, with the lack of hay and pastures leading to livestock producers selling off stock and crop producers saying they had crops that were starting to burn in May.

But Havre was still short for the calendar year - 4.32 inches with the normal value 5.53 inches - and the water year. The water year normally sees 7.17 inches by June 15 and Havre had 6.16 inches this year.

Classon said the jet stream off the Pacific normally pushes farther north by the end of June, bringing dryer weather to this region as July rolls in, and the early models predicted that this year as well. By June 25 go the start of July, precipitation was expected to drop off in this area.

But with the incredibly active jet stream bringing storms to Montana, the confidence in that is decreasing, with heavy precipitation possibly continuing.