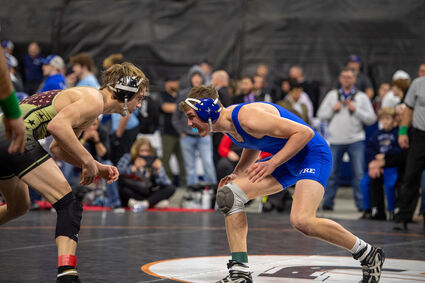 Havre's Orion Thivierge wrestles at the state tournament at the Metra in Billings earlier this season where he ended his high school career with another state title. Thivierge was one of over 25 athletes from Havre High school to earn all-state honors over the last school year.

With the school year now over, it is time to reflect on the accomplishments of many Blue Ponies over the last year. From the fall of 2021 to the spring of 2022, many Ponies performed well in their athletic endeavors to earn Class A All-State honors.

In his final year as a Pony, Orion Thivierge was named the Havre High Senior Male Athlete of the Year. He started the year in football where he was named an all-state player at inside linebacker. In wrestling, he earned all-state honors as he won another state title as he wrestled in the 170-pound weight class. It was his third state champions...