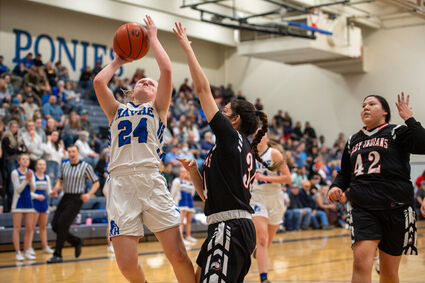 Havre's Sadie Filius goes for a shot against Browning at Blue Pony Gymnasium earlier this year. Along with Box Elder's Kyla Momberg and Harlem's Taya Trottier, Filius will represent the Hi-Line on the Montana all-star team in the Montana-Wyoming series this weekend.

While the high school basketball season may be over, that does not mean Montana high school players get a break. In fact, some of the best hoopers in the state will get another shot to showcase their skills as they will compete in the Montana-Wyoming all-star basketball series this weekend in Sheridan, Wyoming and Lockwood.

On the Montana girls team, the Hi-Line will be well represented. Sadie Filius from Havre High School will represent the Blue Ponies on the Montana all-star team. With the all-star team being made up of some of the best players in the state, Filius was honored to be chosen for its roster.

"I'm super excited to have the opportunity to play in these games," Filius said. "I know that not a lot of people get chosen to play so I'm even more excited to represent Montana."

Filius had an excellent career for the Ponies. In her senior year this past season, she earned all-state honors and was named the Havre High female athlete of the year as she helped the Ponies repeat as Class A state champions. Once this weekend is over, Filius will focus on college ball as she will play for Carroll College at the next level. Filius believes her experience on the Montana all-star team can help her as she prepares for the next step of her basketball career.

"I think this experience will just help me adjust to playing at the next level because all the girls on our team are going to play college ball," Filius said.

Filius is not the only basketball player from the Hi-Line to be playing this weekend. Kyla Momberg from Box Elder will also play for the Montana all-star girls team after an excellent career for the Bears. This past season, she helped lead the Bears to a District 9C championship as well as an appearance in the Class C state title game. Momberg will next play basketball at Montana Western.

Taya Trottier from Harlem will also play for the Montana all-star girls team this weekend. Trottier is also coming off an excellent season as she averaged north of 20 points a game and helped lead the Wildcats to a spot in the Class B state tournament despite a losing record in the regular season. Trottier will stay on the Hi-Line as she will play college ball for Montana State University-Northern.

The rest of the Montana all-star girls team is made up of some of the best players in the state. Missoula Hellgate will be represented by Bailee Sayler and Keke Davis. From Class A state-runner up Billings Central, Mya Hansen will be on the team this weekend. Other players on the team include Billings West's Kaitlin Grossman, Billings Senior's Brenna Linse, Melstone's Draya Wacker and Roy-Winifred's Madeline Heggem.

The Montana girls team will be coached by Rocky Mountain College head coach Wes Keller, who just won NAIA coach of the year. In last year's series, Montana swept Wyoming to improve its overall record to 35-13 in the event.

While there are not any players from the Hi-Line on its team, the Montana all-star boys team has some excellent players on its roster. Gatorade Player of the Year Brayden Koch will play for the team after finishing his career with a state title with Helena Capital. Bozeman will also be represented by the likes of Jackson Basye and Ty Huse.

Other players on boys team include Payton Sanders from Billings Skyview, Ta'Veus Randle from Belgrade, Caden Bateman from Missoula Big Sky, Rhett Reynolds from Shelby, Damon Gros Ventre from Lodge Grass, Owen Long from Three Forks and Javonne Nesbit from Froid-Medicine Lake. The team will be coached by Steve Keller, who has led Montana to victories in all their games since he took over in 2012. The Montana boys all-star team leads the all-time series, 63-27, over Wyoming.

The games this weekend will be the last time that these athletes will compete against other players from the high school level. Once the weekend is over, many of them will need to get ready for college ball. While she has mixed emotions about playing one last time against high school competition, Filius looks to make the most out of this weekend.

"It feels weird knowing this is the last time so I'm going to try to have fun with it," Filius said.

The series will begin tonight in Sheridan, Wyoming before moving to Lockwood on Saturday. On both nights, the girls games will start at 5:30 p.m. before the boys games begin at 7:30 p.m.