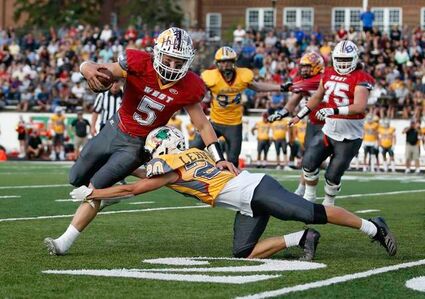 Hamilton quarterback Tyson Rostad runs the ball at the East-West Shrine Game on Saturday. Rostad was named the West's offensive MVP as he scored four touchdowns in the 40-21 win for the West.

On Saturday night at Memorial Stadium in Great Falls, some of the best high school football players in the state once again gathered to compete in the Montana East-West Shrine Game. While the Hi-Line did not have much talent in the 75th edition of this game, many athletes showed out in the West’s 40-21 victory over the East.