Havre volleyball took that next step as a program 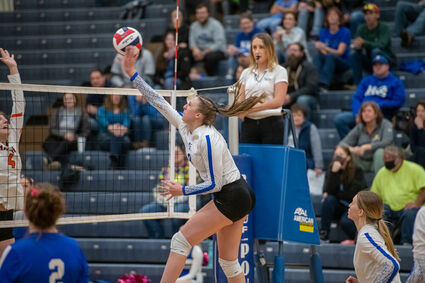 Havre's Yelena Miller spikes the ball against Hardin last fall at Blue Pony Gymnasium. Last season, the Havre High volleyball team improved as a program and finished second at the Class A State tournament. With several players returning including Miller who was all-state last year, the Blue Ponies should be in the mix again.

This past year was a great one for Havre High School athletics. Many programs and individual Blue Ponies placed at state to bring a trophy back to the Hi-Line. That string of success began in the fall of 2021 when the HHS volleyball finished second in the Class A State tournament. Heading into the season, expectations may not have been that high for the Ponies, so bringing home a trophy from state showed the growth of the HHS volleyball program.

"I don't think a lot of people at the beginning of our season would have thought that our team would have been in the conversation about being in...