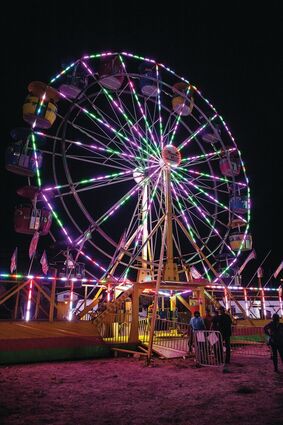 2022's Great Northern Fair is set to be much larger than previous years, with far more events, rides and entertainment, the fairgrounds manager said.

English said he and the Great Northern Fair Board have been working hard to get this year's fair set up, and they're set to nearly double the number of events planned.

Among the biggest additions, he said, is the tractor pull Saturday, the addition of which means there will be one major event going on in the lower arena every single evening the fair is going on.

Wednesday, July 13, at 3 p.m. will be the Junior Rodeo, with the Great Northern Ram Rodeo Thursday July 14.

Finally, Sunday, July 17, at 4 p.m. will be the Havre Jaycees Demolition Derby and Bump 'N' Run.

English said there will be plenty of free entertainment, including a bunch of new musical acts like Ja'net Eastman Wednesday, Thursday and Friday as well as Larry Myer those same days.

"The music is ridiculous this year. We have some amazing stuff," English said.

"I was really lucky to get him," he said.

English said there will also be Randy's Freckle Farms Zoo, open every day of the fair, as well as the National Guard Climbing Wall.

He said he's also really excited for some of the fair's paid entertainment, open every day of the fair, like the bounce houses, stunt jump, mechanical bull and Gelly Ball, the last of which he said is a total blast to play.

"There's a lot of neat stuff this year," he said.

English also said they're going to have a record-setting number of rides this year, provided by Midway West Amusements.

He said more food also will be available than last year, as well as more vendors in general.

He said spots for vendors in the Commercial Building are going fast so anyone interested in a place there needs to get in touch with him at the fairgrounds as soon as possible.

By most accounts the 2021 Great Northern Fair was a great success. It was English's first full fair as manager, as he was appointed shortly before the 2019 fair and the 2020 fair was canceled due to the pandemic, the first cancellation in the fair's more-than-century-long history.

He said he's looking to make this the biggest and best fair it can possibly be and he's hoping everyone has a really good time.