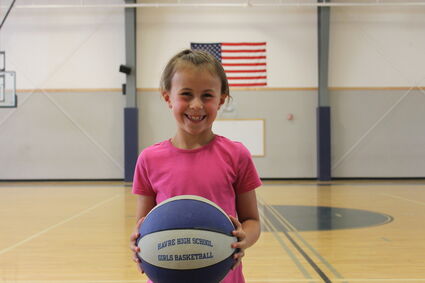 Bentlee Baltrusch participated in the Havre High girls basketball camp at Sunnyside School Monday. Even though she is only 7 years old, Baltrusch is working on her basketball game before she eventually tries out for the HHS girls basketball team, a program that just won its second straight state title.

The success of the Havre High girls basketball team is sure to inspire the next generation of hoopers on the Hi-Line. One of those young basketball players is 7-year old Bentlee Baltrusch, who has only been playing basketball for a few months.

"It was really fun," Baltrusch said about learning from the high school players. "I really liked it and I think they showed me a lot of skills."

The Blue Ponies have cemented themselves as one of the best high school programs in the state so when she eventually reaches that level, Baltrusch hopes to maintain that level of success. But she also does not want to forget the ultimate point of the game.

"I just look forward to having fun," Baltrusch said about high school basketball.

Baltrusch also wants to play volleyball for the Ponies one day, a volleyball program that just finished second at the state tournament last fall. She was not able to attend the HHS volleyball camp earlier in the day because she was not old enough. But thanks to her mom, who plays volleyball, Baltrusch has been able to learn more about the sport as well.

For now, Baltrusch is just working on her skills as she tries to become a better basketball player. During her time at the HHS girls basketball camp, the Havre Daily News got the chance to ask her five questions.

HDN: How did you originally get into basketball just a few months ago?

Baltrusch: "I heard that a lot of my friends were doing it so I wanted to check it out and just see if I liked the sport."

HDN: What do you think are your strengths as a basketball player?

Baltrusch: "I'm really good on offense. On defense, I'm pretty good too but I think I'm a little bit better on offense."

HDN: What do you still need to work on?

Baltrusch: "I hope to get better at defense and also working on getting my shot higher."

HDN: What did you enjoy about the HHS girls basketball camp?

Baltrusch: "It was pretty fun. We won one of the games that we played and we did a lot of shooting. We did pretty good on defense and offense."

HDN: What other sports do you play?

Baltrusch: "I actually play a lot of sports. I do hockey, soccer and softball. I do a little baseball sometimes when there's a lot of baseball camps in the summer. I like swimming, not that I get to do a lot of it. I'm actually looking forward to maybe tumbling and dancing this year instead of maybe doing some other sports."