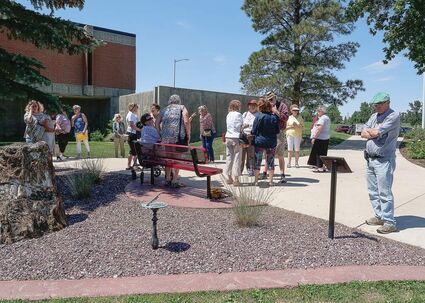 People gather outside of Hagener Science Center at Montana State University-Northern Tuesday for the dedication of a sundial and bench to the late Antoinette "Toni" Hagener.

A local garden club this week honored Antoinette "Toni" Hagener, a local political and community leader who helped form the club in 2009.

Bullhook Blossoms Garden Club Tuesday dedicated a sundial, plaque, bench and piece of land planted with the state grass, bluebunch wheatgrass, to honor Hagener near the entrance to Montana State University-Northern's Hagener Science Center, which was named for Lou Hagener, her husband and a longtime Northern science professor and community supporter himself.

Lou and Toni Hagener moved to Havre in 1948 so he could take a job at then-Northern Montana Coll...