Another state title is business as usual for the Blue Ponies 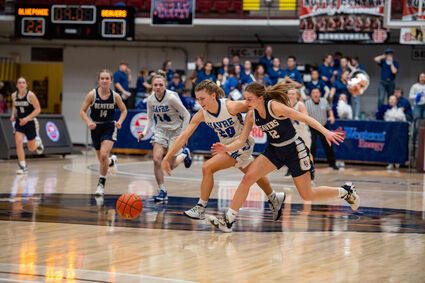 Havre's Avery Carlon dribbles the ball against Dillon at the Class A State Tournament at the Dahlberg Arena on the University of Montana campus in Missoula. Thanks to their hard work, the Blue Ponies have won the past two Class A state championships.

This past season for the Havre High girls basketball team continued to demonstrate why it is one of the best programs in the state. After dominating the regular season, the Blue Ponies once again went on a run through the postseason to win their second straight Class A state title.

Heading into the season, HHS Head Coach Dustin Kraske just wanted to see his team playing their best by the end of the year. That just happened to result in another title for the Ponies.

"What I like is that this particular team reached its best basketball at the end of the season and that happened to coincide with being state champs," Kraske said. "I'm happy for our kids. They were able to get to the highest level of basketball and that was our good fortune."

After winning the state title in 2021, the Blue Ponies easily could have let their foot off the gas. Instead, they got right back to work. They got in the gym early in the summer to work on their game which set the standard for the Ponies for the season.

With all the hard work they had put in before the season began, Kraske knew the Ponies were already in the conversation for one of the best teams in the state heading into the season.

"I think we felt like we were there from day one," Kraske said. "(It was just) playing hard, working together, rotating, communicating and doing all the nitty gritty stuff that it takes to win games and our kids exceeded that."

The Ponies demonstrated they were worthy of being in the conversation as they dominated their competition during the regular season. The Ponies won most of their games by double digits thanks to their suffocating defense. By the end of the regular season, the Ponies finished the season undefeated in the Northeast A.

But there was adversity along the way. Early in the year, the Ponies suffered a 55-54 loss in overtime to Billings Central. That wound up being their lone loss of the regular season. Later in the Easter A Divisional championship game, Ponies lost, 49-37, to Billings Central for their second loss of the season.

Despite the loss, the Ponies regrouped and played strong at the Class A State Tournament in Missoula. The Ponies got back to their defensive roots as they won, 66-37, against Browning and then won, 48-39, against Dillon. The Ponies then found themselves in the state title game, once again playing Billings Central.

This time, the Ponies learned from their previous loss for their most important victory of the season. After allowing Billings Central to average 51.5 points in the previous two games, the Ponies' defense led them to a 37-30 victory for the state title.

Along the way, the Ponies were led by several all-state players. Sadie Filius finished her career with all-state honors after averaging 8.7 points a game and she led the team with 58 total assists through the season. In her lone season with the program, Jade Wendland was named all-state as she averaged 10.8 points on 36.5 percent shooting.

"They're big basketball players," Kraske said about his all-state players. "There's no question about that. They mean an awful lot to our program and they help us be really good."

However, Kraske acknowledged the roles that everyone else played in the Ponies' championship run. Seniors Lacy Preeshl and Alyssa Oliver made an impact on the court for the Ponies. Players such as Lizzi Haney and Kyanna Jarvis also got significant minutes during the Ponies' title run.

Fortunately for the Ponies, they will return many of these players next year. Carlson and Miller will return as they try to build on their all-state seasons while players such as Haney and Jarvis should get more chances to make an impact this season. With the players and the culture that he has in place, Kraske is excited to begin their quest for a three-peat this winter.