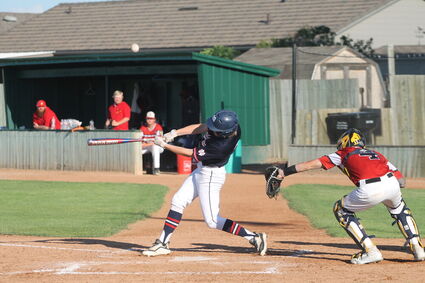 The Northern A District Tournament is fast approaching, and the Havre Northstars American Legion baseball club is certainly rolling toward it.

On Tuesday night, the Northstars continued their hot streak with a pair of dominating wins over the Great Falls Chargers in Great Falls.

In the opener Tuesday night, the Northstars beat the Chargers 14-8 in a slugfest.

The Northstars fired up the offense in the first inning, when an error scored one run.

Havre rallied four runs in the fifth inning. Ezra Pyle and Brody Nanini all contributed in the big inning with RBIs.

On the mound, Jevin Jenkins took the win for the Northstars. Jenkins allowed five hits and five runs over three and two-thirds innings, striking out four. Colter Solomon and Peterson entered the game out of the bullpen and helped to close out the game in relief. Cole Pace took the loss for Great Falls Chargers A. Pace surrendered nine runs on nine hits over five innings, striking out five.

Peterson, Drake Berreth, and Nanini each had multiple hits for the Northstars. Peterson led Havre with four hits in four at bats. Havre stole eight bases during the game as three players stole more than one. Eli Cloninger led the way with three.

Liam Sullivan went 4-for-5 at the plate to lead Great Falls Chargers A in hits.

With a win in tow, Havre looked for its third straight conference sweep, and the Northstars got it with a 16-0, five-inning smashing of the Chargers in the nightcap.

Lane Kinsella shut down the Chargers, throwing a complete game shutout and leading Havre Northstars 18U to a 16-0 victory Tuesday

One bright spot for Great Falls Chargers A was a single by Hunter Clark in the sixth inning.

Kinsella got the win for Havre Northstars 18U. He surrendered no runs on one hit over six innings, striking out seven.

Noah Banderob took the loss for Great Falls Chargers A. He allowed nine hits and eight runs over four and a third innings, striking out two.

Havre collected 20 hits on the day. Berreth, Solomon, Brody Nanini, Trenton Maloughney, Cloninger and Peterson all managed multiple hits for the Northstars. Berreth led Havre Northstars 18U with four hits in five at bats. Havre didn't commit a single error in the field. Vancampen had the most chances in the field with eight.

Havre rose to an impressive 27-17 on the season and remain in second place in the Northern A District standings with just two weeks left in the regular season.

The Northstars will now return to non-conference play with a trip to Florence for the Bitterroot Bucs Invitational starting today and running through Sunday. It's Havre's final tournament of the 2022 campaign.

Following the tourney in Florence, Havre wraps up league play next week with home doubleheaders against the Vauxhall Spurs July 14 and the Medicine Hate Knights July 16.

The Northstars also get to stay home for the Northern A district tournament, which will be held at Legion Field July 21-24 in Havre.