76 million-year-old dinosaur skeleton from Havre to be auctioned 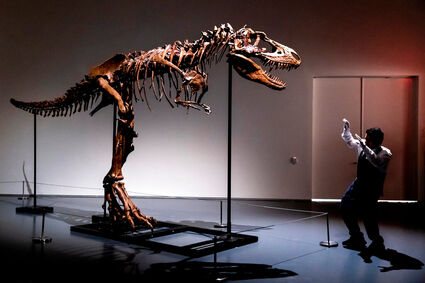 A Sotheby's New York employee demonstrates Tuesday in New York the size of a Gorgosaurus dinosaur skeleton, the first to be offered at auction.

A former local resident is going up for auction with the presale estimate for the going price $5 million to $8 million, The Assoiated Press reports.

The fossilized skeleton of a T. rex relative that roamed the earth about 76 million years ago will be auctioned in New York this month, Sotheby's announced Tuesday.

The Gorgosaurus was an apex carnivore that lived in what is now the western United States and Canada during the late Cretaceous Period. It predated it...