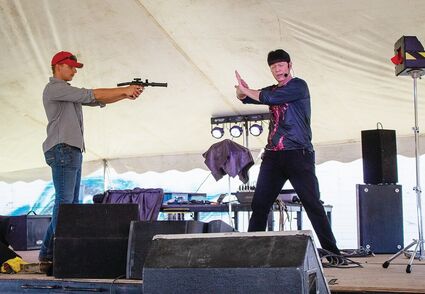 For the first time in many years, Michael Mezmer is back at the Great Northern Fair, peforming his DangerMagik Magic Phenomena and TranceNosis Comedy Hypnosis shows.

Before his first show Thursday Mezmer said he's very glad to be back in Havre and he's been away for too long.

"I had great audiences and a whole lot of fun so I'm excited to be back here, I've been wanting to come back for many many years," he said.

Mezmer said the pandemic definitely affected his shows, but since then he's done a lot of TV work while still going to some live shows in states like South Dakota, but he's glad to be back in Montana for a live show.

Mezmer is a professional magician and hypnotist who's been doing shows around the world for many years and has an act that Fairgrounds Manager Frank English said he was very excited to book, given how much praise and honors its gotten from the Rocky Mountain Association of Fairs.

Mezmer said his DangerMagik show, which runs at 2 p.m. and 4 p.m. starting Thursday and going through Saturday at the fair, features magic and illusions in the style of David Blaine and Chis Angel, featuring a bullet catch, putting his hand in a wolf trap, swallowing razor blades and a number of daring escapes.

He said he's one of the few magicians who does this kind of magic act at fairs and wanted everyone to know that despite its name, it is family friendly.

Starting Thursday and running through Saturday he also runs a comedy-hypnosis show at 6 p.m. where the audience becomes part of the act.

"We have a fantastic time together," Mezmer said. 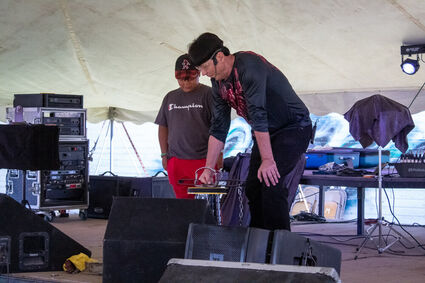 He said he's been doing live performance of some variety or another since he was 5 years old and picked up magic at 11.

Since becoming a professional magician, he said, he started doing hypnosis after seeing some really impressive performances during his time in Asia.

He said he has 18 variations of the hypnosis show he rotates through so it will be a different one every time for those who may want to attend more than once.

Mezmer said people may also come to the DangerMagik show more than once to try to figure out the tricks, but he doubts they'll succeed.

"They will keep trying to figure out how it's done, which they never will," he said. " ... Hope to see you all there."