Demolition derby pushes through the heat 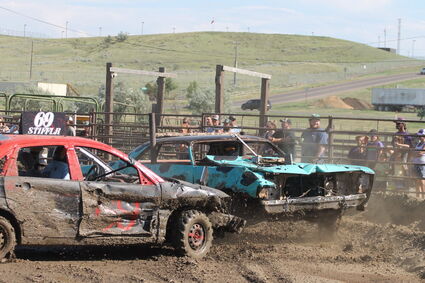 Drivers in the Havre Jaycees Demolition Derby collide with one another at the Great Northern Fairgrounds Sunday. At the end of the destruction, Garrett Powell was the derby champion. Along with the demolition derby, several Bump 'N' Run races took place throughout the evening. Bobby Vanek won the bump 'n' run stock race while Seth Hamilton took first in the modified bump 'n' run. Despite the extreme temperatures, the Havre Jaycees were able to put on a show and complete the demolition derby to wrap up the week of the Great Northern Fair.

Throughout the event, there were several bump 'n' run races where drivers competed for the top spot. In the stock bump 'n' run race, Bobby Vanek finished first while Dustin McKinney came in second behind him. In the modified bump 'n' run, Seth Hamilton took home first place while McKinney also finished second in that race.

There were some other races over the course...