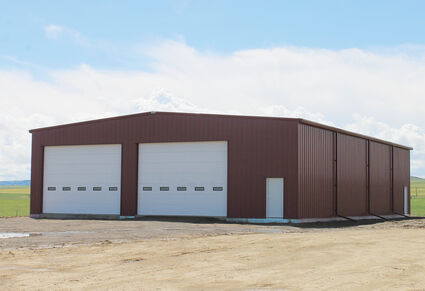 Bear Paw Volunteer Fire Department is one step closer to finishing its fire hall after a donation from a local bank.

Stockman Bank donated $5,000 to help finish the building, which has been erected a few miles south of Havre off Montana Secondary Highway 234, Beaver Creek Road.

"We are excited to give to this very worthwhile project," Vice President Branch Manager of Stockman Bank Havre Kaare Engebretson said in a press release "Supporting the Bear Paw Volunteer Fire Department is just another way we are proud to give back to our local community. The service that these volunteers and first responders provide to Havre and the surrounding area is immeasurable, and we are more than happy to help."

The project to house the equipment of, and provide a centralized location for, the volunteer fire department has been more than a decade in the works.

Bear Paw Fire Chief Josh Bebee last fall that said the primary utility of the fire hall would be to store vehicles and equipment during the winter, making sure they aren't damaged by the elements, something that is difficult for the department at the moment.

He said the department has vehicles scattered across their coverage area, which means they're response times are excellent, but in the winter it's difficult to find places to store the vehicles properly, which inevitably leads to breakages and malfunctions that cost the department time and money.

Bear Paw Volunteer Fire Department Treasurer Brad Gregoire said it will also provide a space for the department to run trainings, hold meetings, and store historical documents about their department, as well as keep records in one place.

Bear Paw Volunteer Fire Department Board Vice-President Mike Moore said it will also provide a space for department events like barbecues and bring members of the department together.

They all said the hall will do wonders for the efficiency of the department and but be a huge morale boost.

Bebee said the efforts to get a fire hall for the department essentially started with former Bear Paw Volunteer Fire Department Fire Chief Giles Gregoire, Brad Gregoire's grandfather, who left the department thousands of dollars when he died Oct. 6, 2009.

Brad Gregoire, said that money was put into a fund to accrue interest as the department pursued other ways of funding the project.

By March, a number of fundraisers and donations had brought the project near completion.

In addition to personal donations the department had received, it also had seen multi-thousand dollar donations from CHS Big Sky, Tilleman Motor Co. and Tilleman Equipment as well as the Havre Lions Club, along with smaller donations from Guild Mortgage and other contributors. 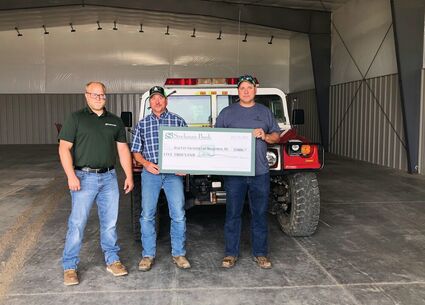 The department also had great attendance at their dollar-a-drink fundraising event at Crawford Distillery in November, making $14,000 between the event itself and the silent auction and raffle they held there.

By March, the department also received eight semi loads of millings from Schellinger Construction to help build an approach.

By this month, construction on the building itself was essentially complete.

Bebee said Clausen and Sons Construction handled the construction of the building, Patrick Construction did the dirt and gravel work and Pasco Ready Mix/Hi-Line Concrete Pumping helped with the concrete, but lots of people from across the community lent their hands and expertise to the project, and he said he wanted to thank every one of them, along with the people who donated to the project.

The Stockman Bank donation is helping with inside work that still needs to be completed, including inside concrete and electrical work as well as heating, ventilation and air conditioning, lights and other items.