Northstars walk it off to begin postseason 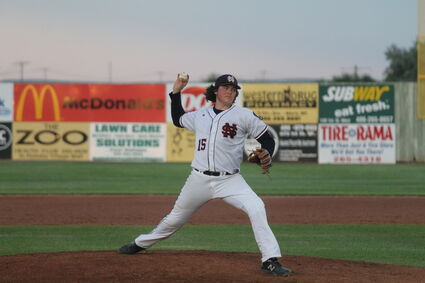 Havre's Jevin Jenkins pitches against the Calgary Strive at Legion Field on Thursday night. The Northstars won, 11-10, thanks to a walk off RBI single from Trenton Maloughney.

The last game of the first day of the North A District baseball tournament ended being its most exciting. The hometown Havre Northstars and Calgary Strive went back and forth at Legion Field on Thursday night, resulting in a 10-10 ball game heading to the bottom of the seventh.

The Northstars put themselves in position as they loaded the bases, but the Strive recorded two outs to put Havre in danger of squandering the opportunity. But senior Trenton Maloughney was able to squeak a single to left field to drive in the run and give Havre the 11-10 win to start the postseason.

"I was just thinking about putting something on the barrel that I could get through," Maloughney said about his last at-bat of the night. "I thought we could get stuff through their infield all night. We just had a tough time hitting the ball but I'm glad that one finally fell."

Havre found itself in holes throughout the night. The Northstars trailed, 5-0, early in the game and then trailed, 7-4, heading into the bottom of the sixth. Even after they took the lead, the Strive had a strong top of the seventh to retake momentum. Despite all of that, Havre head coach Patch Wirtzberger was not surprised by his team's resiliency.

"These guys have done that all year long," Wirtzberger said. "That's just something you can't coach into them. They just got it. They've battled every single game and every single inning all season long so I wouldn't expect anything less from these guys."

The Northstars' adversity started early as Calgary got rolling in the top of the first. After loading the bases with a hit batter and a pair of walks, Solomon Searle hit a triple to right field to clear the bases to give Calgary the 3-0 lead. Then in the top of the second, a pair of Havre errors allowed runners to reach base. Julian Dunay then hit a single to center field to clear the bases and extend the lead to 5-0.

Despite the early hole, the Northstars climbed their way back. After loading the bases, Drake Berreth hit a double to center field to drive in a pair of runs. Brody Nanini followed that up with a double of his own that drove in another pair of runs to cut Havre's deficit to 5-4.

But the bats slowed down for Havre over the next three innings as they were unable to score any runs. The Strive defense did not commit any errors in the game and Matthew Metcalfe had a strong start to the night.

The Strive took advantage of their strong defense to extend the lead. In the top of the third with two men on, Dunay hit a double to left to drive in a run. Then in the top of the fifth, Alex Foster scored on a sacrifice fly to push the lead to 7-4.

But the Northstars eventually broke through Metcalfe's pitching to get on a roll. In the bottom of the sixth with two runners on, Nanini singled to left to clear the bases and cut the deficit to 7-6. After loading the bases with another single and a walk, Maloughney hit an infield single to drive in a run to tie the game. After all their mistakes in the game, the Northstars had fought back to make it a new game.

"All season long, I think we've responded to adversity really well," Maloughney said. "I thought we played one of our worst outings tonight. It's bad that it's at districts but we have to find a way to win and I feel like we always find a way to do that."

Despite the blown lead, the Strive responded in the top of the seventh. After getting two runners on base, a single drove in a run to cut into the deficit. Dunay then scored on a groundout to cut the deficit to one run. A Havre error allowed another runner to score to tie the game.

Even after blowing their own lead, the Northstars started the bottom of the seventh with a double from Eli Cloninger and a single from Berreth. Nanini was then intentionally walked to load the bases with no outs.

But a strikeout and a groundout gave the Northstars only one more out to end the game. Fortunately for Havre, Maloughney took advantage of the scoring opportunity with the single that drove in the winning run. This weekend's tournament will be the last time Maloughney will play at Legion Field, so he was happy to make a memory like this.

"I think that was really special. I've always felt this place has a magic in it," Maloughney said. "It was pretty special tonight to see a packed crowd getting after it and it was awesome to walk it off."

Maloughney finished the game with a team high three hits while Nanini led the Northstars with four RBIs. Nanini also earned the win as he pitched the final 0.2 innings of the game.

The Havre Northstars and the Vauxhall Spurs will play tonight at 7 p.m. at Legion Field. 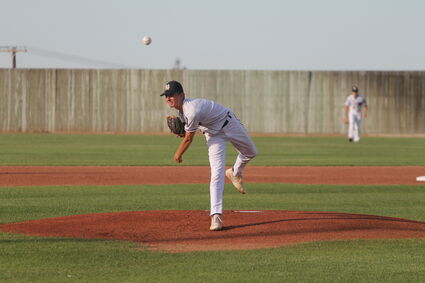