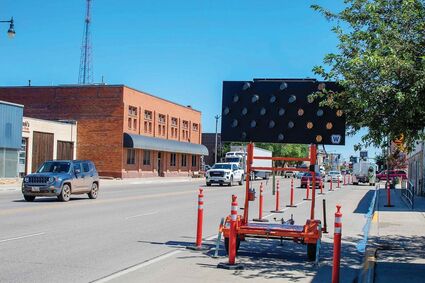 A parking lane is blocked on First Street in Havre Thursday as Montana Department of transportation works on curbs on the street, which is where U.S. Highway 2 passes through Havre. MDT says work on the curbs, including parking or single lanes of traffic being blocked, will continue estimated through Aug. 24.

The Montana Department of Transportation is working to replace broken curbs on First Street in Havre, which has led to lanes being closed on the main street through Havre.

Moore said his team has completed most of the major removals and will be prepping surfaces this week, as long as everything stays on track.

Moore said the current curbs were put in in 2007 and 2008, but since 2010 they've been seeing more and more breakages in them, and now MDT is replacing them...