Northstars' season comes to an end at state 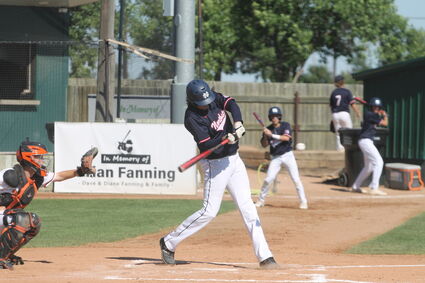 Havre's Jevin Jenkins bats against the Vauxhall Spurs at Legion Field last month. This past weekend, the Havre Northstars finished in the top four of the Class A State tournament in Belgrade. Their season ended Saturday with a 15-5 loss to the Butte Miners, who went on to win the state championship.

The summer has finally come to an end for the Havre Northstars American Legion baseball club. Over the weekend at the Class A State tournament in Belgrade, the Northstars competed hard in their final games of the season.

After a loss to open the tournament, the Northstars won two straight elimination games, including a 9-3 win over the Glacier Twins on Friday night. But the season finally came to an end with a 15-5 loss to the eventual state champion Butte Miners. Even though the season ended with a loss, Havre head coach Patch Wirtzberger believes the Northstars played some of their best...