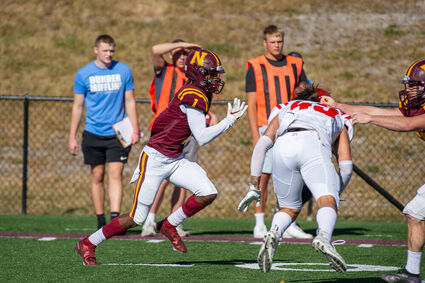 Joshua Rose will be part of a talented secondary at Montana State University-Northern this fall. The Lights begin fall camp later this week.

Still, there will also ways be good cornerbacks and safeties in the Frontier Conference, and the fall of 2022 will be no exception.

At Montana Western, Latrell McCutcheon returns as one of the top defensive backs in the league. An All-Conference pick a year ago, McCutcheon had 43 tackles and 19 pass breakups, as well as three forced fumbles.

A top DB is also back at College of Idaho in the form of Dorian Hardin, who finished three interceptions and 43 tackles on his way to All-Conference honors. Montana Tech’s Jordan Washington is another returning All-Conference defensive back. The junior Oredigger had three picks and 42 tackles last season on his way to NAIA All-American honors. Washington is part of a stout Tech secondary which also includes fellow corner Jake Orris and Nokia Harmer.

Rocky Mountain College has always had strong defensive backs and Ty Reynolds is back for the Battlin’ Bears. Reynolds was an All-Conference performer last season. Reynolds racked up 61 tackles and three INTs a season ago. Carroll College brings back a standout in Zach Spiroff as well. He had 47 tackles and three interceptions a year ago.

At Southern Oregon, Stokes Botelho and Jake Regino are back for the Raiders. The duo was exceptional last season, combining for over 60 tackles last season, while Botehlo had five interceptions. Blaine Chavez at Eastern Oregon is another one to watch this fall.

Montana State University-Northern also has plenty of outstanding defensive backs returning. That’s what happens when the Lights were so young a year ago.

Senior Hunter Riley should be one of the top safeties in the Frontier this season. Riley has eight picks in his last tow years with the Lights, while he tallied 94 tackles and 4.5 tackles for loss last season. Josh Rose is also also an outstanding DB for the Lights, who totaled 37 tackles and two INTs a year ago.

Editor's Note: This is the sixth in the Havre Daily News series on the top returning players by position in the Frontier Conference. In Friday's HDN, we'll take a look at the top running backs in the league.