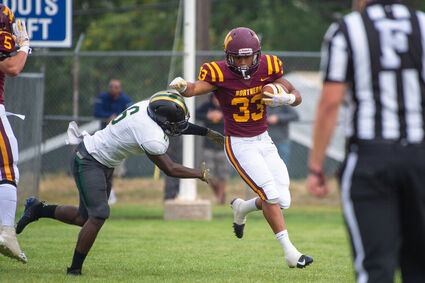 Stars at every position always litter Frontier Conference football. But year-after-year. fall after fall, there seems to be no position more impactful in the Frontier than that of the running back.

Historically, some of the top rushers in all of the NAIA typically come from the Frontier, and it will be to no one's surprise if that happens again in 2022.

Neville, now a senior, was second in rushing in the Frontier last fall on his way to First-Team All-Conference accolades. He finished 2021 with 955 yards and 10 touchdowns, and combined with quarterback Jon Jund, helps, to form one of the most dangerous offenses in all of the NAIA.

Counts, now in his third season at Montana Tech. has been a beast from the beginning. A Second-Team All-Conference standout last year, he was fourth in the Frontier with 757 yards and five scores. Combined with junior Kaleb Winterburn, the Orediggers should be a stout running team this season.

Carroll College thrives on the running game as well, and the Fighting Saints, of head coach Troy Purcell, know they have not one, but two great tailbacks. Sophomore Duncan Kraft burst onto the season last year when he rushed for 855 yards and eight touchdowns, after replacing starter Mathew Burgess, who suffered a season-ending injury after one game. Burgess, who was an All-Conference performer as a freshman, is now back, and with he and Kraft in the backfield, the Saints have a pair of workhorses for sure.

Running the ball is always big at College of Idaho, but the Yotes had to say goodbye to All-American Nick Calzaretta, who led the Frontier in rushing two straight years. Many players will line up to replace Calzaretta, including Hunter Gilbert and Boise State transfer Allmar Alexander.

Eastern Oregon had a star on the rise in Victor Rosas, but he was injured much of last season. Rosas though, when healthy, could be one of the best backs in the league, while Jordan Eggers had a strong season, as well, a year ago.

Meanwhile, several teams in the league will be breaking in new starters, including at Rocky Mountain College, Southern Oregon and MSU-Northern.

In Havre, Andrez Trahan-Proctor will be back, and will likely be in the lead to start for Northern. Trahan-Proctor missed last season with an injury. Cannon Smith looks to be a lead guy at running back for the Lights of new head coach Jerome Souers, as well. Last year, the Lights lost promising starter Izayah Boss to an injury, while Smith ended up playing in five games, rushing for 178 yards and one touchdown. Boss is no longer with the Lights.