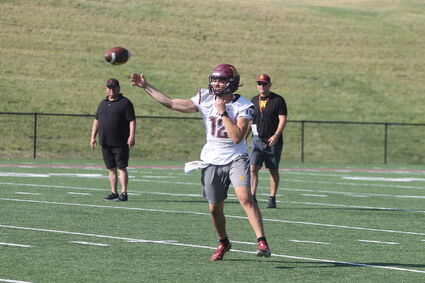 Northern quarterback Brenden Medina throws a pass at a practice at Tilleman Field Thursday morning. The Lights' practice Thursday began the fall camp for the Lights as they try to get up to speed for their first season under new head coach Jerome Souers.

On Thursday morning at Tilleman Field, the Montana State University-Northern football program finally got its fall camp started. With it being the first practice of fall camp, the Lights focused on their conditioning to get themselves ready for the season opener Aug. 27 at the College of Idaho. While the Lights may not be where they want to be yet, MSU-N head coach Jerome Souers liked what he saw from his players to start fall camp.

"They did pretty well. I was kind of surprised," Souers said. "We got off on the right foot, and we got to make sure and improve every day from here on out."

Since Souers was hired back in February, the Lights' offseason schedule got off to a later start than usual. So in their first practice of the fall, the Lights had a light practice. Early on in the practice, the Lights took part in drills that focused on their fundamentals. Across Tilleman Field, players either worked on their passing, catching or even their punting.

After more stretching and conditioning to get the Lights in shape, the players returned to drills focusing on their fundamentals such as their footwork. The Lights then capped off the practice with several minutes of 5-on-5 drills, allowing quarterbacks and their pass catchers to develop chemistry.

Souers has been able to work with the Lights during the spring and summer. However, it was not until this practice was he able to work with all the recruits the Lights signed this past spring. Because of their low numbers on the roster, the 18 high school players and two college transfers will need to make an immediate impact. Fortunately, veterans such as linebacker Dylan Wampler believe the younger players are already buying into the program.

"They are already picking up on what we got going and what we've had for almost three weeks," Wampler said.

After several years with the Lights, this will be Wampler's first year under Souers. Wampler has been working with Souers over the spring and the summer, setting the new standard for the program. After finally getting on the field for this fall, Wampler has already seen the impact Souers has had on the program.

"We're all the same athletes and we all still practice the same, but I think we're spiritually and mentally together as a team," Souers said.

"The sky's the limit from here," Wampler said. "If you have your family and you're ready to die for your brother, there's nothing left you can't do." 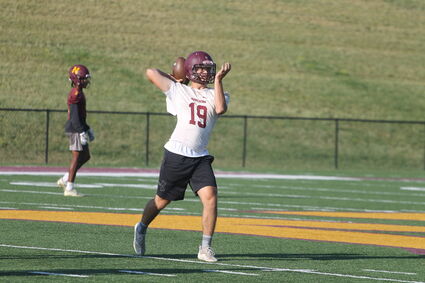 Souers saw plenty of positives from his first fall practice with the Lights, mostly the energy and attitude he saw from his players. But he knows the Lights will need to work on everything from their deployment to their alignment, and most importantly their execution. So over the rest of fall camp and even through the season, the Lights will need to continue steadily improving in order to fulfill Souers' vision for the program.

"The tough part is we have a long way to go so we have to make the most of the next three weeks before we get playing," Souers said. "Each week, we've got to improve and if we can maintain this cycle, we're going to be the program we need to be by the end of the year."