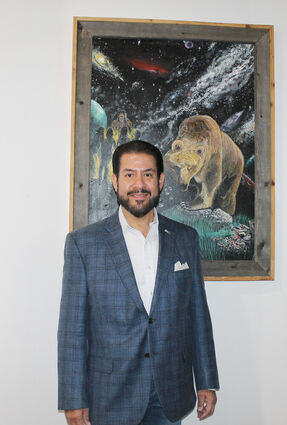 Garcia visited Stone Child College last fall as part of an effort to forge a connection between his community, which has Houston as its county seat, and Rocky Boy, which he said shared many of the same challenges and have much to learn from each other.

Last year's meeting focused on combating the pandemic, addressing mental health concerns and preserving language in their respective communities, and while the pandemic has waned in the past few months, Garcia said Friday there is still plenty the two communities can collaborate on.

This year, Garcia spent a few days in Montana including multiple days at Rocky Boy, meeting with local institutions and participating in the Honoring the Elders Sobriety Walk Friday morning.

Garcia said one thing he was impressed by during his last visit was when he saw Rocky Boy's public health clinic and noticed that their public health and mental health systems were unified, with people being able to address all their needs in the same place.

He said mental health is a huge issue in his community and Rocky Boy's approach has informed recent changes they've made in trying to unify public and mental health services, breaking down an artificial barrier between the two that he said just contributes to the stigma surrounding mental health.

He said his county speaks about 200 different languages and dialects and the communities have a lot to collaborate on.

On the other side of the coin, he said, he noticed that Rocky Boy was hurting for some critical infrastructure training, which is something they can help with, Garcia said.

Garcia said he facilitated a team from Texas A&M University to come to Rocky Boy and provide training, some of the best in the country, to people here.

Another thing he's hoping he might be able to help Rocky Boy with is his county's Employ2Empower program, which seeks to help homeless people become employed and make it into permanent housing.

He said this program, which started in Houston and recently became countywide in Harris County back in Texas, has been extremely successful in offering employment to homeless people and was recently acknowledged for its success by the Biden Administration.

Garcia said the program, in its pilot run, saw 25 percent of its participants get jobs and become permanently housed, another 37 percent maintain full-time jobs, and many others are still active in the program.

He said some have stayed with the program to become team leaders, and he's hoping the program might be helpful for Rocky Boy.

He said his time in Montana and Rocky Boy has, once again, been very productive and he hopes to give back to them as much as he takes home to his community.

Garcia said he also spoke with Hill County Commissioner Mark Peterson during his trip here and was impressed with recent efforts to address the St. Mary Diversion's ongoing issues.

He said water infrastructure is a big issue for Texas as well.

Jilot said he and others from Rocky Boy have been to Harris County to see their community and brought back plenty of ideas to Rocky Boy.

He said the training provided by Texas A&M was excellent and he hopes they get even more participants when they come back next year.

Jilot said, in general, they've been collaborating on other law enforcement issues like domestic violence.

Stone Child College President Cory Sangrey-Billy said the partnership has been going well from her end as well, and has inspired them to start implementing a new program at the college.

Sangrey-Billy said one of Harris County's needs at the moment is digital street infrastructure, like stop lights, digital signs and people to coordinate these systems.

She said Stone Child College is working on a new program to add to their existing computer science program that could train people to coordinate these digital systems remotely, so Rocky Boy youth can help a fellow community while not having to leave their own.

She said the college and Harris County are also collaborating on ways to address racial health disparities as well, something they've been working on since their last visit during the pandemic.

Sangrey-Billy said their partnership on language education has also been fruitful, with Rocky Boy trying to preserve their Native languages, in the wake of losing so many Native-language-speaking elders to the pandemic, and Harris County trying to improve Spanish language education.

"I think the partnership is really going well," she said.