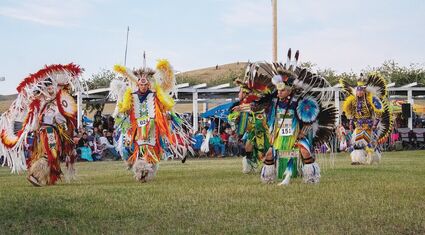 Dancers perform in the powwow at the 2022 Rocky Boy Celebration at Rocky Boy's Indian Reservation.

After two years away due to the pandemic, the Rocky Boy Celebration returned this weekend, bringing in dancers, musicians, vendors and a whole lot of people from the Rocky Boy area and beyond.

In 2020 and 2021, the powwow had to be canceled due to the COVID-19 pandemic, which hit Native American communities around the U.S., including Rocky Boy, very hard.

Online powwows served as a substitute for some, with many communities doing their best to fill the void left by these important events, but as successful as many were, most seemed to agree that it just wasn't the same as being there in person.

Last year, Northern Winz Hotel and Casino held a powwow at the Great Northern Fair, an event that was hailed as a huge success, but many there still missed the Rocky Boy powwow.

Among this year's powwow attendees was George Ray Grant, who came from Wyoming for this year's event.

Grant said he hasn't been in the area since attending a ceremony held just before the pandemic and it's good to be back.

An attendee, who came down from Canada, was Joe Cas, who, like a couple others, said the event did seem a bit smaller this year, but he didn't care.

He said he suspects it will take another year or so for things to get back to how he remembers them, but maybe he's just being nostalgic.

Local fashion designer Rebekah Jarvey was at one of the booths at the event and she said she's also glad to be back.

"I'm so glad that we actually got to have a powwow this year," Jarvey said.

She said going two years without the event was difficult for a lot of people, making those years feel empty, and for some that feeling will continue this year unfortunately.

She said she knows people who have caught COVID-19 and still can't come to the event, so they're going to miss out on three full years of the powwow.

Jarvey said this year's powwow is emotional for her, not just because of the years away, but because there are those who still can't be there.

Watch for more photos in an upcoming edition of Havre Daily News.