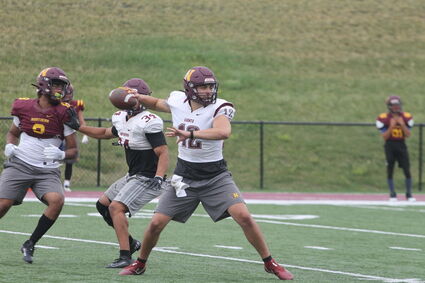 Northern quarterback Brenden Medina steps back to throw at the Lights' fall camp at Tilleman Field Saturday. After playing tight end for a brief period last season, Medina switched back to quarterback to compete for the starting job this fall.

As the Montana State University-Northern football program tries to find itself under new head coach Jerome Souers, many positions are still to be determined this fall camp.

One of those positions is the most important one in football: the quarterback.

There are several quarterbacks competing for the starting position as camp is underway. Kaymen Cureton returns after starting most of last season for the Lights. Freshman Chance Fields also joins the program after playing for Lewistown in high school. A familiar name to Lights' fans will be senior quarterback Brenden Medina, who has been with the Lights for several years.

Medina has had a long and interesting journey with the Lights to get to this spot. Just last year, after losing his spot on the quarterback depth chart, Medina switched positions to play tight end for the Lights. Playing that position got him some playing time last year, but at the end of last year, Medina realized behind center was where he belonged.

While his time at tight end was short lived, it was not a waste. Working as a tight end helped him learn more about the offensive line as well as the front seven of the defense.

"It really helped me out at quarterback, now being able to understand what the defensive front is doing instead of just coverage wise," Medina said. "It helped me a lot just understanding the X's and O's of the game."

During those seasons, the Lights struggled as they failed to win a game in the Frontier Conference. Those struggles eventually led to the Lights hiring Souers as their new head coach this fall. As he has worked with Souers over the spring and summer, Medina has liked how Souers has built a culture that has brought the team together.

"He's an awesome coach. He's someone who gets you to understand how important everything is off the field," Medina said. "I feel like everybody is my family member now and that is really important to me because it's something we've never had here."

As he has dealt with a small roster as he took over the program, Souers has made sure to rely on veterans such as Medina for help. As they have set the foundations for the culture that Souers wants, he believes Medina has been a good example both on and off the field.

"He's done a great job off the field and with training," Souers said. "I think he's picking up the new system. It's a challenge for any quarterback coming into their senior year."

After several years in an offensive system, it might be hard for a quarterback to adjust to a new scheme late in his career. But as the younger players have gotten more involved and with the help of the coaching staff, Medina likes how the new offense for the Lights is coming along.

"We're starting to dial it in," Medina said. "(We have to) execute and just take it step by step. We got two or three weeks to get ready so we just got to keep learning and keep growing."

With a new head coach, the Lights will be looking to begin taking those steps to becoming a winning program. Many players on the roster will look to do that by winning the starting spot at their positions this fall. Regardless of if he wins the starting quarterback spot, Medina hopes to help the Lights as best he can and make the most out of his final season in the program.

The Lights open their season Aug. 27 at College of Idaho.