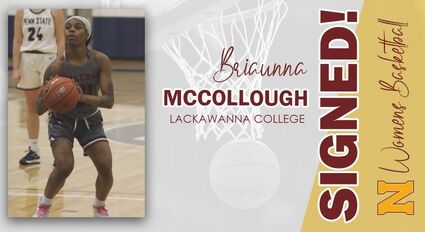 McCollough, a Harrisburg, Pennsylvania native, is a 5-6 guard.  She played her first two seasons at Lackawanna Community College in Scranton, Pennsylvania.  As a freshman, she was the Eastern Panhandle Athletic Conference Player of the Year and was named All Region XIX.  She averaged 12.4 points and 5.1 rebounds per game.  Her team finished with a record of 27-9 and qualified for the NJCAA Division II National Tournament, where they finished with a 2-2 record.  At nationals, McCollough was named to the all-tournament team.

As a sophomore, she averaged 15.7 points, 7 rebounds, and 2 assists per game while shooting 41 percent from the field and 31 percent from the three-point line.  For a second straight season, she earned All-Region honors.  Her team finished with a record of 25-6.

"We are thrilled to have Briaunna on board,” Mouat said. "She is an excellent athlete and brings a lot of experience at the college level.  Her Lackawanna teams were very successful and she is a winner.  She is great to the rim, can hit the open three, and distributes the ball very well.  Defensively, she really gets after it and can guard a number of positions on the floor.  I like her toughness and the things she brings to the floor.  We are really excited to have her on board and are looking forward to her progress in a Skylight uniform."

McCollough plans on majoring in business at MSU-Northern.