Museum board looks for help at buffalo jump 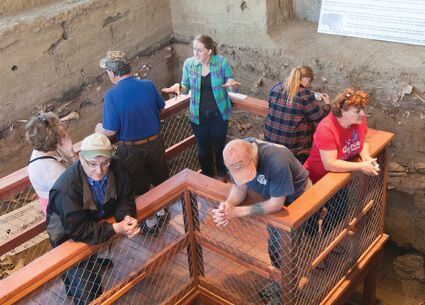 Tour guide Hannah Pepprock speaks during a tour of the Wahkpa Chu'gn Buffalo Jump in 2014. H. Earl Clack Memorial Museum Board is looking for paid tour guides and volunteers to help at the archeological site and its interpretive center and gift shop.

The H. Earl Clack Memorial Museum Board discussed their current staffing issue at the Wahkpa Chu'gn Buffalo Jump during a meeting Monday evening where they also discussed artifact donations and various issues at the museum's new location.

Museum Manager Emily Mayer said the ideal situation for her would be to have two paid tour guides and a volunteer to watch the Interpretive Center and gift shop, though she said that is almost certainly never going to happen.

Mayer said the workload she has is becoming a serious issue for her and she needs help.

"My body is not handling 16-hour work days well at all," she said.

H. Earl and Margaret Turner Clack Memorial Museum Foundation Board President Elaine Morse said she understands that they don't want to rely too heavily on intermittent workers, but for the sake of Mayer's wellbeing she thinks they need to start using them more.

She said they also need to work on getting more volunteers and make a coordinated list to relieve some of the pressure on Mayer.

Morse also gave an update of her own at the meeting, saying she's working on getting mockups and quotes for new signs at the museum, most of the cost of which should be covered by a grant they've put in for.

She said they've also picked up a really impressive printer donated to them from Erickson Insurance Group, one that can do pretty much everything they would need, including printing pamphlets and brochures.

Morse also talked about getting storm windows installed at the museum's new location, something that was supposed to be done by the company that handled the building's asbestos abatement, but left before completing.

She also brought up a concern about how the museum is protecting its artifacts in the wake of a recent incident involving a rowdy child who was caught jumping on a bed from Fort Assinniboine.

Morse and Mayer both agreed that the incident indicated that some changes were probably necessary and the board discussed possibly putting up signs on specific items like the bed to indicate that such behavior is prohibited, as well as a sign encouraging parents to keep track of their children while inside the museum.

The board also discussed a potential issue with the flooring at their teepee at the Holiday Village Mall, which mall staff have told them needs to be replaced lest it become a safety issue.

She said she was told the company is short-staffed and wouldn't be able to do it, but some time after was notified that someone will be coming to finish the project later this week.

She said the foundation is also looking for a new board member and asked everyone to let her know if they can think of anyone qualified for the position.

On the subject of open board positions, Board Chair David Sageser said members of the board over the past few days have called the Hill County Commission in an effort to get a response from them regarding whether they will approve bylaw changes they sent them back in early May.

Sageser said the commission called them back and told them the changes, which included adding two more board seats, do not require approval from the commission, only that the changes be submitted.

So, he said, they can start looking for possible new members.

Board members discussed a number of candidates who could fill these positions but would need to contact them to see if they are available and hold further discussions before any decisions can be made.

The board also established a committee to review and revise some old job descriptions that may need to be updated.

Later in the meeting they also voted to accept the donation of an ornate dresser that belonged to Dr. George Drinkwater, one of the town's first dentists and a respected community member.

They also discussed the possible donation of a Works Progress Administration uniform, one belonging to a person who worked at Beaver Creek Park during the administration's eight-year history.

The Works Progress Administration was an employment and infrastructure program created by President Franklin Delano Roosevelt in 1935 as part of the New Deal and employed 8.5 million Americans during the darkest years of the Great Depression, most famously for public works projects.

Much of the work in creating Camp Kiwanis in Beaver Creek Park was done by administration employees.