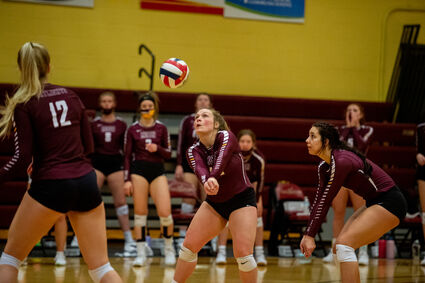 Northern's Kaitlin Murdock hits the ball against the Montana Tech at Armory Gymnasium last year. With the Skylights, Murdock has just begun fall training camp in preparation for her final season in the program.

With the fall sports season finally arriving, many teams are getting themselves ready for the season ahead. One of those teams is the Montana State University-Northern volleyball team that began its fall camp last week. As the Skylights made their return to Armory Gymnasium, some of them such as Kaitlin Murdock are happy to be back on the volleyball court.

"It's fun. I really like the team because we all get along really well," Murdock said. "It's just fun to be in a competitive atmosphere again."

This fall camp and season are especially important to Murdock as this will be her final year in the program as a senior. As she heads into her final months with the Skylights, Murdock hopes to end her college career on a high note.

"(You) have to have the best ball control," Murdock said.

Along with her teammates, Murdock has been working on her game at training camp in preparation for the upcoming season. As with any new season, the Skylights will see new players to the team and new rotations in their lineup, making the preseason an important adjustment period.

"(The preseason is) really important. Just getting to know the girls and getting used to playing off all the new girls," Murdock said. "It's just getting back in the flow of playing."

Murdock's life has led up to this final year with the Skylights. From a young age, she was introduced to volleyball by her older sisters. After watching them play, Murdock eventually joined them on the court and worked with them, which helped her become the player she is now.

While playing for the Skylights, Murdock has studied civil engineering at MSU-N. Once she is done with college after this year, she thinks she will probably head back to her hometown of Lodge Grass and find work there. She will also probably help her father on their family ranch when she returns home.

The Skylights are in the midst of their training camp with their first match set for Aug. 18 against Valley City State University in Valley City, North Dakota. Before the Skylights get their season started, the Havre Daily News got the chance to ask Murdock five questions.

HDN: What are your personal goals for your senior season?

HDN: From your time with the MSU-N volleyball program, what is the most important thing you have learned?

Murdock: "Being a team is going to help you more than anything such as skill. Being a team would be better than having 20 of the best girls."

HDN: As a senior on the team, what do you think is your role in the locker room?

Murdock: "Mostly being happy. Just to bring everyone else's energy up for games and practice because if we're all happy, we're going to play better. So I'm making jokes with them and keeping them happy."

HDN: Over the years, what have you loved the most about volleyball?

Murdock: "My teammates. I just like having relationships with all the girls."

HDN: What is the hardest part about volleyball?

Murdock: "Probably the mental side of it. It's so much. It's a game of errors so you have to be mentally strong to play."