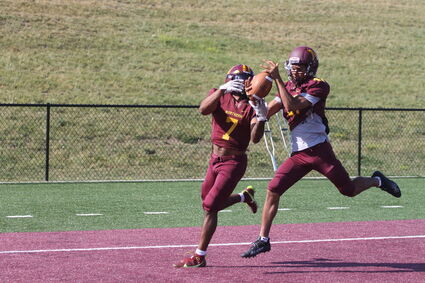 A pair of Northern players run a drill at the Lights practice at Tilleman Field Tuesday. On Tuesday, the Lights recreated game action with 11-on-11 drills, their second of the fall camp.

The Montana State University-Northern football team is slowly coming along at fall camp over the past week. After starting the camp focusing on the players' conditioning, MSU-N head coach Jerome Souers and his staff have slowly introduced the game more and more into practice to get the Lights ready for the season.

At Tilleman Field on Tuesday morning, the Lights had their second session of 11-on-11 drills of the fall camp. While he liked the energy of his players, Souers knows there still plenty of work to do.

"We still have a lot of teaching and learning going on," Souers said. "But I was pleased with the energy and we've been pushing them hard. They're working through a lot of soreness right now and the fact that their attitude has been up the entire time shows me something about where we're at."

Late in the practice, the Lights' offense got warmed up with 5-on-5 drills. In the drills, quarterbacks Brenden Medina and Kaymen Cureton worked with the offense. Medina had a solid showing in the drills as he completed five of six pass attempts with his lone incompletion being a drop. In his drills, Cureton completed two of his four passes with one incompletion a drop. Both quarterbacks threw short and intermediate passes in the drills.

After getting some running plays in without any mistakes, the Lights started throwing the ball around. In his drills, Medina completed six of his seven pass attempts. Meanwhile, Cureton again went 2-for-4 in the 11-on-11 drills. Again, the passing game focused on short and intermediate throws to move the ball. 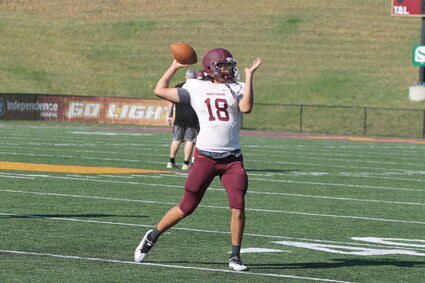 After shorter practices to start the fall camp, Tuesday's practice lasted two and a half hours. Along with the full pads and the 11-on-11 drills, the longer practices are helping the Lights get ready for their season opener on Aug. 27 against the College of Idaho.

"We're progressing to be able to play a full game. We have to be ready for three and a half hours on Saturdays," Souers said.

While the Lights are working their way into game shape, there is plenty of room to grow in their execution. At Tuesday's practice, Souers noticed the Lights' mistakes and knows what they need to work on if they want to be ready to compete this season.

"We're constantly working on consistency," Souers said. "We put the ball on the ground too many times today, we had some missed fits against the run and all those are little things that are correctable. That's the process that we're in right now. It's just teaching the game."