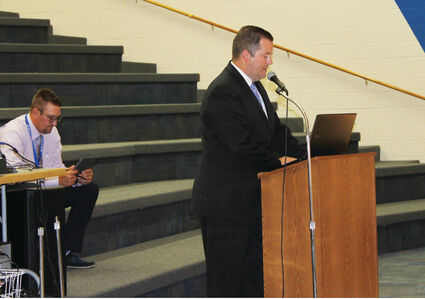 The Havre Public Schools Board of Trustees discussed two big projects the district is working on, awarding a bid for the project to resurface the Havre Middle School Track and hearing an update from Ameresco on their plans to upgrade the district's air circulation systems.

Superintendent Craig Mueller said the project to resurface the Middle School's track, which he and board members have been talking about doing since earlier this summer, has received a bid totalling just more than $389,000.

Mueller recommended that the board award the bid, saying he cannot overstress the positive impact the project will have, improving a piece of infrastructure that not only school athletes use, but many members of the local community as well.

He said the project's cost can be covered by using funds from the district's flexibility and interlocal funds, and it would drain neither of them, leaving enough funds for other projects the school may need to get started.

He said the original hope was to have the project completed by fall, but, regardless, work on the track will not interfere with games.

The board unanimously approved awarding the bid.

The board also heard an update from Ameresco Account Executive Matt Thompson on plans being drawn up for a $4.6 million project to improve the district's air circulation and energy efficiency in its buildings.

The vast majority of this project will be covered by Elementary and Secondary School Emergency Relief funds, funds that were made available to schools in during the pandemic to improve air circulation and filtration, which is important to making sure viruses don't spread through particulate matter in the air.

Thompson outlined a number of improvements planned for the various school buildings, including Havre High School, which will have controls for their various systems upgraded from a pneumatic system to a digital one, more reliable and efficient.

This will come with a project to replace the ventilators for each classroom as well as an upgrade to the school's boilers.

All of this, along with adjustments to decrease cold drafts, will improve the comfort of people in the building and improve energy efficiency, Thompson said.

Havre Middle School will see similar upgrades to its boiler plant and airflow boxes along with an upgrade from pneumatic to digital.

Thompson said they are also looking at installing LED lighting in the gymnasium and cafeteria areas.

He said part of the project also involved putting new lighting in the district bus garage as well as an electric vehicle charging station, though these lighting and electricity projects would need to be funded with non-ESSER funds.

He said they are also working on solar panels for the garage and some modifications to the overhead door to reduce drafts.

Sunnyside Intermediate School, he said, has a boiler plant that is in better shape than those in the middle or high schools, so an upgrade to that facility would be a project to address further down the line.

It would, however, get a pneumatic to digital system upgrade and would have some work done on its attic area to improve temperature control through increased insulation.

Highland Park Elementary School would also get a digital upgrade, but its boiler system has a unique situation requiring a different solution, Thompson said.

He said the school had one boiler plant that is in very good shape, but another that is not doing as well, so Ameresco is proposing that the newer, better one be modified to service the school alone, allowing them to abandon the old one.

Lincoln-McKinely Primary School got far less attention than the other schools, getting some upgrades to reduce drafts but not as much as other buildings, which ended up being a source of consternation for many board members.

Board members asked Mueller and Thompson why Lincoln-McKinley, which is arguably the least comfortable school in the district, got so little attention.

"Whether it's hot or cold out, it can be a miserable experience trying to control that temperature," Board Vice-Chair Tim Scheele said.

Mueller said he doesn't disagree, but with Lincoln-McKinley being their oldest building, one that may well end up being replaced soon and one that would require a huge overhaul of its systems to make any real improvements, it may not be wise not to invest too much in the building at this time.

He said possible upgrades to the school would be looked at in more long-range strategic planning and as the building's fate is decided, but right now, he and Ameresco's team don't think such costly upgrades are the best use of the ESSER money, though he certainly understands the board members' concerns.

Board members asked if it's possible to pursue other routes of financing to pay for upgrades to Lincoln-McKinely without sacrificing money meant for upgrades to the other buildings.

Mueller said that is certainly a possibility, but when they set out to make the plan he was given the impression from conversations with the board that they were to focus primarily on planning how to use existing funds.

Another matter of concern, raised by Trustee Jacob Ingram, was the lack of high-end filtrations systems that were talked about early in the project.

He said during previous conversations about the project Ameresco talked about installing high-end air filtration systems that will improve air quality and he's concerned that that idea appears to have been dropped, especially since these funds were made available to address the pandemic.

Thompson said Ingram is correct about the fact that they were interested in installing such systems, but having studied the schools' more closely and achieving a better understanding of their specific issues, they decided that upgrading their current systems is the most useful way to use the ESSER money.

He said the air filtration systems they talked about are very good, but having efficient air circulation systems is much more important to air quality and those projects should take priority.

"That's kind of the most critical part of air quality," he said.

Thompson said installing air filtration systems would be possible, but with the money they have access to, the projects they are proposing will do the most good for the schools.

Ingram then asked the same question to Mueller, saying Thompson did not directly answer his question.

He said a final vote on whether to proceed with this plan will occur at the next regular meeting and he and Thompson are happy to answer questions and address issues until then.

He then talked about other projects the district is looking into including improvements to the district's tennis courts. 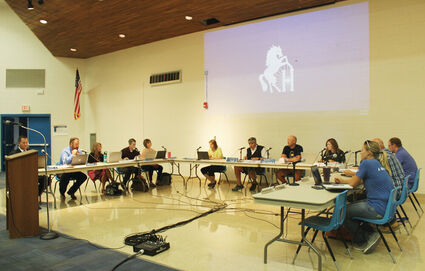 The Havre Public Schools Board of Trustees conducts a monthly meeting Tuesday in Havre Middle School.

Mueller said there are a lot of needs at the schools right now and he said the board may want to consider using a permissive levy, something made possible by laws passed in 2017.

He said permissive levies give districts significant flexibility and could help the district chip away at these projects, but it is not a decision to be taken lightly.

He said the district has never used such levies and people in the community are sure to have questions and reasonable concerns that he and the board need to be willing to listen to, and explain why they feel it's necessary, given that it will be a burden on local taxpayers.

At the end of the meeting Mueller also requested that the board set up a special meeting so they can vote on a number of issues that should get done before the school year begins.

Among these issues is the approval of a bunch of new paraprofessionals.

The board agreed to set up such a meeting.