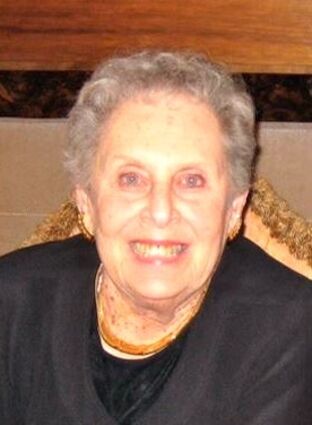 Betty Jaraczeski Mora passed away August 10, 2022. She was 92 years old. Betty was a resident of the Lodge Senior Living since August 2016.

Betty was born in Great Falls March 4, 1930, to John and Ruby (Lundberg) Jaraczeski. She was raised in Great Falls and attended elementary school in Ulm, which at the time was a one-room school. Betty also attended Paris Gibson Middle School and Great Falls High School, graduating in 1947. She attended the College of Great Falls for one year.

Betty and her friends enjoyed watching the Great Falls Electrics' baseball games. Betty met Electrics' centerfielder, George R. Bandy, of Sacramento, California. They were married in Great Falls in 1949 and moved to Sacramento before relocating to Belgrade. Betty and George had four children, Kristin, Kelly, Tom, and John. Betty and George moved their family to Havre in 1956, where they resided for the next 20 years. During these years Betty worked as a secretary in elementary schools and at Northern Montana College.

Betty moved back to Great Falls in 1977 after she and George divorced. Betty met John Mora, an old friend from Great Falls High School, at a class reunion. John actually took Betty on her very first date when she was a freshman, and he was a senior. Married in August 1978, Betty and John lived in Great Falls for the next 38 years. They enjoyed traveling to visit friends and relatives, going to Bozeman to watch Bobcat football games, golfing, and getting together with friends from high school.

In August 2016, Betty moved into the Lodge Senior Living facility. She was a resident there until her death.

Betty was an avid reader throughout her life. While at the Lodge she helped maintain a small library for residents. She also volunteered with the Salvation Army Ladies' Auxiliary. While her children were in school, she was active in PTA. Needlework and sewing were hobbies Betty enjoyed. She especially treasured time with her many friends and family throughout her long life.

Betty's children would like to thank The Lodge for the kindness, compassionate care, and patience shown Betty during her time there. A thank you is also extended to Peace Hospice of Great Falls for the support given to our mother during her final days.

Cremation has taken place. A memorial service will be held at Hillcrest Lawn Memorial Chapel, 1410 13th Street South, Saturday, August 20, 2022, at 10:00 a.m. Betty's ashes will be interred at Highland Cemetery.

Condolences for the family may be shared online at http://www.SchniderFuneralHome.com .