It's time for the Ponies to tee it up 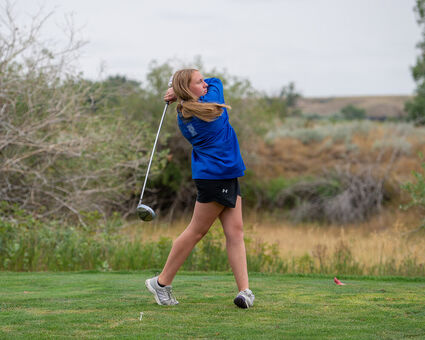 After a couple of different schedule changes, the Havre High boys and girls golf teams are about to tee off on a brand new season.

The Blue Ponies, who have a record number of players out for the team this season, will begin the fall schedule at Wednesday's Fergus Invitational in Lewistown, starting three straight days of golf action for the Ponies. Havre also hosts the Havre INvitational Thursday, then travels to the Browning Invite on Friday.

"It's exciting to get started," Pony head coach George Ferguson said. "We have a great group of kids out for the teams again this year. Probably the most kids we've ever had out for golf, and that in and of itself is really exciting because, we're always trying to grow the sport. It's a great game, and to see so many kids wanting to be a part of it, that's awesome."

The Ponies also have a host of returners out for both the boys and girls teams this fall, each of which finished fourth at last year's Eastern A.

"The boys team will be very competitive," the coach said. "It's a young team overall, but we have a lot of kids who are pretty evenly matched, so there's going to be a lot of close scores, and probably a lot of changes to our lineup throughout the season. But, that will help everyone get better. Competition is always a good thing."

"I really like how much a lot of our girls have improved over the course of last year," Ferguson said. "We have quite a few girls who have the experience now, and that will only help them get better and better. I predict by the time September rolls around, our girls are going to be postihng some great scores, and they're just going to keep getting better even from there."

September isn't far off, and while the Class AS golf season is short and sweet, the Ponies will have plenty of opportunities to get better. Besides the trio of events Havre plays the first week, the Ponies also travel to big tournaments in Hardin, Glendive, Sidney, Billings and Laurel, as well as continue their traditional match-play triangular with Lewisdtown and Livinngston in Harlowtown. The season then culminates with the Eastern A Divisional at Lake Hills in Billings and the Class AState Tournament at the Hamilton Golf Club,

"It's always exciting to get a new year started," Ferguson said. "The kids are great, they're already doing a great job. Our goal is just to keep improving, from all of our beginners and newcomers, to our top varsity players, improvement and making sure we're having fun out there on the course. Those are our two main goals right now.