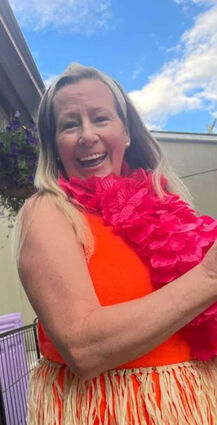 Sharie was born December 19, 1961, in Spokane. She was the third and youngest child of Anna May and Chuck Martin, and little sister to Perry and Paris. The family moved to Missoula when Sharie was a baby, and she grew up on Gilbert Avenue in the Rattlesnake, in a house built by Grandpa Verne. Sharie attended Central and Rattlesnake Elementary Schools and Hellgate High School, graduating in the class of 1980.

After Frank's death in January 2020, Sharie moved to Havre to be near Christina and her family. Bryant and Addison were her greatest joy, and she spent nearly every day of the last two years with them. She was so proud of them, and loved taking them swimming and fishing, and just being involved in their lives. They brought comfort and happiness to Grandma's broken heart, and gave her something to look forward to each day.

Sharie's childhood was full of fun, pranks, and family activities. She loved bugs and spiders and snakes (all the more when she could chase someone with one), she was always the one to start the snowball fight, and she seldom passed up the opportunity for an adventure. As she got older, her body was less and less appreciative of what those adventures put it through, but she never let that hold her down for long. Picnics, fishing, swimming, picking huckleberries, camping, skiing, floating the river, coordinating treasure hunts for the kids and their friends, Griz games - anything active and outdoors was her favorite thing to do. She loved traveling, especially to warm places like Arizona, the Bahamas, Cancun and Brazil. To the end, Sharie was a kid at heart, and she will be remembered for her fearlessness and her laugh, the twinkle in her eye when she was happy or up to something, all the crazy "Sharie Stories" that were so unbelievable yet so true, and how she loved her family and friends.

She is survived by Anna; Christina, Thomas, Bryant and Addison. She is also survived by Perry and Paris and their families; Aunt Gwen; Uncle Al and Aunt Becky; and other relatives and friends, including her two dearest friends, Christie Chaussee and Lillian Kennedy.

Sharie's gone and we miss her, but we know she's at peace and hanging out with Chuck and Frank in the Great Beyond. Her ashes will be scattered in her favorite places at a later date.