New Northern offense looks to find its identity this fall 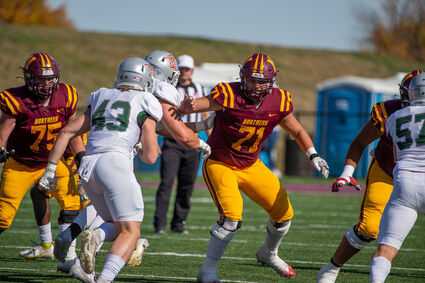 College football is about to make its return to the Hi-Line as the Montana State University-Northern football team will open the season on the road at College of Idaho this Saturday. This fall, the Lights will look to set the foundations for what new head coach Jerome Souers envisions for the program. One of the most important areas where the Lights will need to find an identity this year will be their offense, which Souers hopes is a balanced attack.

"We always seek to have a balance of an equal threat, of being able to run or throw the ball," Souers said. "I think keeping defenses off balance a lot of the time can really create advantages and that's what we try to do."

While the season kicks off later this week, the Lights still have not come to a final decision on who will start at quarterback. Brenden Medina enters his senior season for the Lights after several starts in 2019 and the shortened spring 2020 season. In 11 games in 2019, Medina completed 49.2 percent of his passes for 2,116 yards, 18 touchdowns and 19 interceptions. In his two starts in the 2020 season, he completed 55.7 percent of his passes for 440 yards, two touchdowns and two interceptions.

Kaymen Cureton is also in the mix for the starting quarterback spot after starting most of the 2021 season for the Lights. In eight games last year, Cureton completed 42.6 percent of his passes for 940 yards, four touchdowns and 11 interceptions. He also made plays on the ground with 276 yards and three touchdowns on the ground. Regardless of who ultimately gets the starting nod, both quarterbacks have already proved themselves to Souers.

"They've got an excellent work ethic and they're supportive of each other," Souers said. "It's always tough when you have that situation."

The wide receiver position is another group that is still sorting itself out. But that does not mean none of the receivers have caught Souers' eye. Devin Shelton, the 6-foot-5-inch freshman out of Frenchtown, has shown what he is capable of in camp.

Some other receivers should get significant playing time this fall. Luke Triplett has gotten many reps in practice and Tavarus George should make an impact if he can work his way back from injury. There are plenty of young receivers on the team, so they will need to learn fast in order to make an impact.

"It's a time where we're seeing some good growth and development. It's just going to be a really young and inexperienced (group)," Souers said.

There is some more stability in the tight end position for the Lights as Levi Keltner returns for his senior season. Keltner is coming off a season where he caught 15 passes for 176 yards for the Lights.

"Levi Keltner has done a nice job in that position and probably brings the most experience," Souers said.

If the Lights are going to move the ball this fall, they will need their running backs to pound the rock. Mason Dionne has impressed Souers with his physicality while freshman running backs Kai Green and Jamari Johnson should get some snaps this fall.

"They've both shown great potential," Souers said about his freshman running backs. "They're just out of high school so they just have to adjust and adapt to the college game."

But these running backs will not get many opportunities if the offensive line does not play well this fall. Like some of the other position groups, the coaching staff is still figuring out most of the offensive line. If there is something set in stone, it will be Spencer Kolody at center for the Lights.

"He's kind of the linchpin for the whole offensive line," Souers said. "We're awfully inexperienced in those positions so the position is going to need to continue to develop throughout the fall."

Along with Souers, the new MSU-N offense will be coached by new offensive coordinator Steve Broussard. Since there is still plenty to sort out in regards to the offensive lineup, Souers expects there to be some growing pains this season. But hopefully through that adversity, he hopes to see an offense emerge that can establish itself in the Frontier Conference and on the Hi-Line.

"We really need to develop an identity," Souers said. "We're in Havre, Montana. The winds are going to blow 40 to 50 miles an hour. It could get cold and we could get snow so we need to be a functioning unit that can be productive in all conditions."

The new MSU-N offense will debut this Saturday at 1 p.m. in a contest with College of Idaho in Caldwell, Idaho.