Blue Ponies ready to take the field under Jake Eldridge 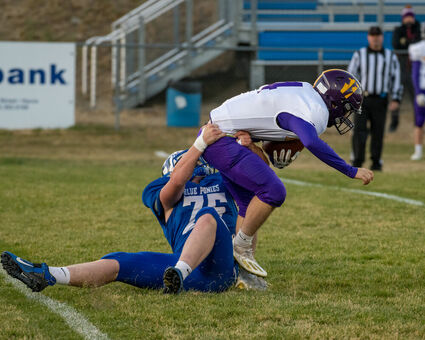 Havre's Stephen Preputin makes a tackle against Livingston at Blue Pony Stadium last year. Under new head coach Jake Eldridge, the Blue Ponies look to turn things around as a program this fall.

After finishing last season with a losing record, the Havre High football team made changes to get itself on track. The biggest of these changes was hiring Jake Eldridge as the new head coach for the Blue Ponies. As he tries to steer the ship in the right direction, Eldridge knows what he wants to see in his first year leading the program.

"I really just want to see the kids understand how to compete for a full 48 minutes in a game," Eldridge said. "I just want us to continue to progress and just continue to get better and better."

While the Ponies will be led by someone new, there will be some familiar faces on the field this season. Kale Vancampen returns to start at quarterback in his final year in the program. Crawford Terry should also make an impact for the Ponies this year. Stephen Preputin will also return to play offensive line for Havre.

Carson Harris will play an important role on defense as a safety and Jason Wold will look to make an impact as a wide receiver. Hunter Sawdey should get many snaps on both sides of the ball as a wide receiver and as a defensive back. But Eldridge believes the seniors' greatest contribution will come in the locker room.

"Our seniors are doing a very good job of leadership and getting the kids and the team to understand what we want as a coaching staff," Eldridge said. "They were really relaying that message very well and working very hard at being great leaders for this team and this program."

Many younger players will get more playing time this year with the Ponies. In camp, Eldridge has seen what Jacob Herring and Tate Nelson can be capable of this season. Eldridge also believes Colter Solomon can make an impact on both sides of the ball this fall.

The following week on Sept. 9, the Ponies head back on the road to face Hardin. The Ponies will look for a repeat of last year when they defeated Hardin, 25-14, at home. On Sept. 16, the Ponies return home for a tough contest against Billings Central, a team that went to the quarterfinals last fall. Last season, the Rams got the better of Havre with a 37-7 victory in Billings.

Havre will then wrap up the regular season and hold its senior night at home Oct. 20 with a game against Laurel. As they try to end the regular season on a strong note, they will also be looking to avenge a 42-7 loss to Laurel from last year. The postseason begins Oct. 29, but the Ponies have quite the schedule to work through if they want to make that far.

"This conference is traditionally very good from top to bottom so everybody that we play week in and week out is going to be very tough," Eldridge said.

The Ponies will look to improve on last year's record where they went 3-6 and missed the postseason. While the Ponies have many talented players on their roster, they will need to execute if they want to excel in the Eastern A this fall.

"We've got to get better at the fundamentals from top to bottom in every position," Eldridge said. "We're going to continue to work on that day in and day out."

With this being Eldrige's first year as the head coach, there might be some growing pains for the program. But as long as he sees progress in his team throughout the year, he will be happy.

"We want to compete, continue to work hard, get better and be at our best at the end of the season and not have any plateaus or peak too early," Eldridge said. "If we can continue to improve week in and week out, that'll be a success for me."

The HHS football team will open the season on the road this Friday at 7 p.m. with a game at Sidney.