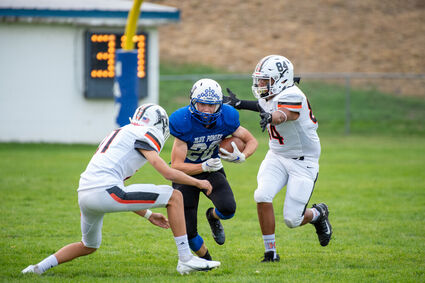 Havre's Jason Wold runs the ball against Hardin at Blue Pony Stadium last year. Under new head coach Jake Eldridge, the Havre High football team will begin the season on the road tonight against Sidney. It will be a rematch of last year's season opener that the Blue Ponies won, 12-7, in a defensive slugfest.

The Havre High football team is finally back as the Blue Ponies kick off the season tonight. The Ponies head on the road to face the Sidney Eagles as they try to start the season on the right foot. As the Ponies head into the first game under new head coach Jake Eldridge, he expects to see them compete in a physical game tonight.

"It's going to be a tough ball game. Sidney is a well-coached team," Eldridge said. "The kids are always really disciplined and they play hard so I'm expecting it to be a hard physical game and I'm hoping our guys can go out there and be physical and compete thei...