Paws getting, looking for, help in major dog rescue 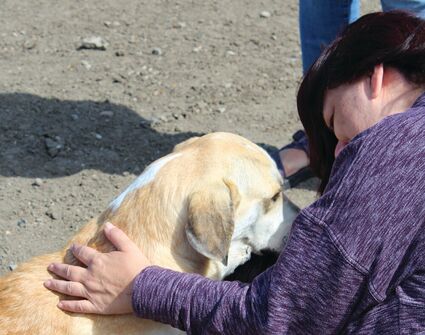 Mariah Racine of Dutton pets Mama Cass at Paws of Chinook Sunday during an open house to show dozens of dogs that have been rescued, so far, from a location in western Blaine County.

PAWS of Chinook was asked last week by Blaine County Sheriff's Office to assist with rescue of an unknown number of dogs at a residence in western Blaine County.

Alissa Hewitt, director and president at PAWS who is leading the effort, said they have rescued 31 dogs of varying ages, including six puppies still nursing. All but two border collies are of mixed breeding so far. They know of at least five more that still have to be trapped.

All of the dogs seem to be nice, with some very friendly dogs in the mix, she added, but several are skittish around people because they haven't had any hu...