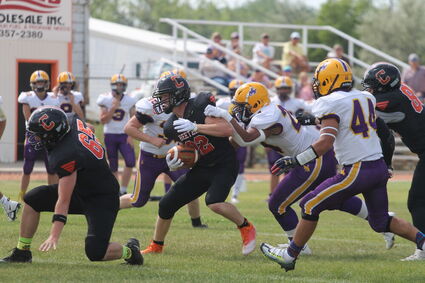 Chinook's Tyler Schoen, middle, runs through the Culbertson defense during a Class C football game last Saturday in Chinook. The Sugarbeeters were one of several area teams to win their season-opening game last weekend.

This past weekend, Hi-Line football finally made its return. As the season begins, every team will be looking to find its identity and set itself apart from the rest of the competition.

The Big Sandy six-man football team came into the season looking to make a run at a state title. On Friday night at home, the Pioneers looked like they will be up to that task as they defeated White Sulphur Springs, 46-6, to open the season.

The Pioneers jumped out of the gates hot to take control of the game. In the first quarter, Braydon Cline threw a 24-yard touchdown pass to Kody Strutz to give the P...