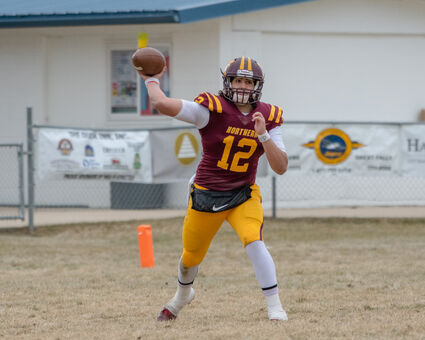 Montana State University-Northern's Brenden Medina throws a pass during a game against Eastern Oregon as a freshman in 2019. That was the last time the Lights and Southern Oregon met in Havre, and it was on a frozen, snowy November day at Blue Pony Stadium. Medina and the Lights will make their home debut against the Raiders Saturday, but because of record Labor Day weekend heat, the game at Tilleman Field has been moved up to 11:30 a.m.

If the first Saturday of Frontier Conference football was any indication, fans around the league are in for a treat. That's because it was a wild first weekend.

Right off the bat, we've already had an earth-shattering upset as Carroll College knocked off nationally ranked Montana Western in Helena last Saturday. Many saw the Bulldogs as a heavy favorite to win the league this season, but Carroll's defense, coupled with an outstanding performance by quarterback Jack Prka, who threw for 148 yards and a touchdown won the game. The win was huge for the Fighting Saints as well, as they don't ha...