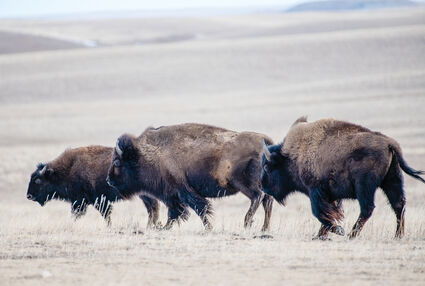 The appeals could slow the APR's effort to grow its conservation herd of bison as part of its larger vision of "creating the largest wildlife reserve of its kind in the Lower 48 states" by stringing together public and private land.

The trio of appeals question whether the BLM adequately weighed public comment, properly considered the economic impacts of the decision, and has authority to authorize such grazing leases under federal law.

They also question some of the brass-tack details of the lease approval, ranging from fencing logistics to how bison grazing will affect rangeland and riparian health.

APR has been working on some version of the grazing application since 2018, though changes have been made along the way, including a substantial reduction in the leased acreage. A judge will have 45 days to consider the appeals, according to APR spokesperson Beth Saboe. Since APR won't move forward with fence modifications during that time, its timeline for introducing bison to the allotments might be pushed back slightly, regardless of whether the Interior Department's Office of Hearings and Appeals stays the agency decision.

APR maintains that the BLM is well within its authority to issue the decision, the ecological benefits of restoring bison to central Montana prairieland are well documented, and APR's broader vision of restoring native wildlife and facilitating public access to both APR and federal land should be celebrated.

Stockgrowers Association gearing up for a fight

Montana Stockgrowers Association President Jim Steinbeisser indicated that his group is gearing up for a sustained campaign against APR in a press release about the appeal, which also included a fundraising pitch.

"Although we have filed the appeal, we still have a long road ahead. We are asking everyone who is concerned about BLM's favorable decision towards the APR and who is passionate about public land grazing, holding federal agencies accountable, and protecting and conserving Montana's iconic open spaces to please consider donating to our advocacy fund," Steinbeisser said. "We are fighting for all Montana ranchers, our rural communities, and for the legacy of ranching in the American West."

MSGA's 217-page appeal raises concerns ranging from how APR will power electric fences to contain bison to whether the BLM has accurately and fully assessed the way bison grazing will impact flora, fauna and watersheds.

The agency's lease approval on the latter point, said that bison tend to graze in patches, which results in a "patchy distribution of vegetation" that's conducive to biodiversity. Riparian vegetation and function benefit from bison grazing because bison forage farther from water than other livestock like cattle, and tend not to stay in one place as long. That improves habitat conditions for flowering plants, riparian birds and amphibians, according to the BLM.

MSGA counters that such assessments aren't taking into account that the grazing pastures at issue are "miniscule compared to the vast prairie bison once roamed."

"These smaller pastures can inhibit the natural migration of wild bison and cause them to excessively trample and defoliate an area, which results in long-term damage to local ecosystems and enables invasive species such as cheatgrass to take over an area," the appeal reads.

MSGA, which was joined in its appeal by the North Phillips County Cooperative State Grazing Districts, also highlighted the difference between managing an area for livestock production and managing an area for wildlife restoration. It argues that the Taylor Grazing Act, which Congress passed in 1934, precludes the BLM from issuing grazing permits to entities that are not rearing animals for production.

The governor's office also centered the Taylor Grazing Act in its appeal.

"Regardless of whether BLM uses the term 'bison,' indigenous animals' or 'indigenous livestock,' federal land management statutes and regulations do not provide BLM the authority to grant the permit APR seeks. The express language of the Taylor Grazing Act (TGA) permits grazing district use by livestock, the definition of which does not include bison," the governor's appeal reads. "A non-production herd of bison is not considered 'livestock' under applicable federal law and BLM cannot issue the permit APR seeks."

In an email to Montana Free Press, American Prairie Reserve said the BLM is well-within its authority to issue grazing leases for bison.

"The Bureau of Land Management's decision is consistent with the law, which specifically authorizes public lands grazing by privately-owned indigenous animals, including bison," said Mary Cochenour, an attorney representing APR.

According to BLM's record of decision, the bureau already administers leases for bison grazing both in Montana and in other western states such as Colorado, New Mexico, North Dakota, South Dakota and Wyoming.

The presence of bison on the landscape has become a proxy for an ongoing debate about land management and larger cultural considerations, something the governor's appeal touches on its argument that the BLM failed to fully study economic impacts of APR's grazing proposal.

"The communities affected by the proposed alternative are ag-centric. The infrastructure and social constructs of the region, from feed stores to county fairs, are based on the day-to-day realities of the production livestock industry. The proposed alternative removes large chunks of land from production agriculture. Doing so will certainly decrease agricultural production revenue, but may also impact support industries, such as feed suppliers, ranch laborers, machinery sales and repair businesses, livestock veterinarians, etc. Depending on the severity of these impacts, the state could also witness a decrease in the affected population base and a shift away from present socio-cultural characteristics."

Pete Geddes, APR's vice president and chief external relations officer, said APR has the support of a variety of stakeholders and will contribute to both landscape and community resilience.

"We've heard from thousands of people; hunters, small businesses, biologists, Indigenous neighbors, and citizens across Montana who share a commonly held view that bison have a right to graze and restore the health of our nation's public lands," Geddes said. "We aim to create more opportunities for future generations of Montanans to access and explore our shared public lands and to protect the public's right to legally restore native wildlife."

Both APR and the parties appealing BLM's decisions are bringing considerable legal muscle to the process. MSGA is represented by the Budd-Falen Law Office, a prominent Cheyenne, Wyoming-based property rights law firm. APR is represented by a senior attorney working with Earthjustice, a nonprofit public interest law group that prevailed against federal and state agencies in recent coal-leasing and coal-mining lawsuits.