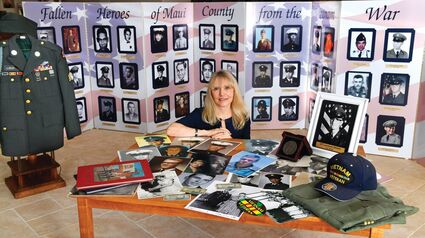 A decades-old mission to honor and memorialize the U.S. soldiers who died in Vietnam is complete.

Janna Hoehn of Maui, Hawaii, told the Havre Daily News that the last photo for “Faces Never Forgotten,” an online effort to provide a photograph for every name on the Vietnam Veterans Memorial Wall, was posted online in August.

“All of these photos have been submitted to the Wall of Faces online memorial with the Vietnam Veterans Memorial Fund website, as well as accompanying The Wall that Heals that travels all over the U.S.,” Hoehn said. “Putting a face with a name changes the whole dynamic of the Wall, it keeps our Fallen Heroes’ memories alive and will honor them, our heroes stories and sacrifice will never be forgotten.”

Hoehn, whose husband, Richard, was raised and attended schools in Chinook, worked on the project seven-days-a-week for 11 years to help find photos for the wall, including in Montana and on the Hi-Line.

She contacted Havre Daily News in 2015 to get the word out she was looking for photographs of eight Hi-Line veterans who died in Vietnam.

She said collecting the photos for Montana veterans on the wall was complete some time ago.

The last photo, from Puerto Rico, came in last month.

“That was a really tough area to find the photos due to the hurricane several years ago,” Hoehn added.

She said she started working on the project after she and her husband made their first trip to Washington 12 years ago and visited The Vietnam Memorial Wall, the first memorial on her list to visit.

She said that, even though she never knew anyone killed in Vietnam, she wanted a rubbing of one of the names.

“I approached the Wall and choose a name, Gregory John Crossman, a (soldier missing in action),” she said “When I returned home, I decided to research Gregory and try to find his family, in the event they were never able to go to the wall, I would send them the etching, hoping they would share a photo with me of Gregory.”

She said she searched off-and-on for six months, reasearching every way possible and never found any family. She said she was quite disappointed, but a cousin, their family historian, sent a college photo of Gregory six weeks later.

She said Scruggs thanked her for sending the photo, the first sent for Crossman, and asked if she would help find photos for the 42 Maui County fallen who were killed in Vietnam.

“I replied, ‘it would be an honor,’” she said, adding that she always hoped to do something for Vietnam veterans because of how they often were treated when they returned.

What she thought would be an easy task turned out to be anything but easy, she said.

She eventually went to the Maui News, Hoehn said, which printed a “a beautiful front page article about the Vietnam Veterans Memorial Fund and the Education Center. I started receiving calls from all over the United States sending me photos.”

She said the paper ran a story about every six weeks, and each time she would receive another photo or two.

After six months, she had a photo of every one of the fallen from Maui County, then moved to her hometown of Hemet, California, found photos of the five fallen soldiers from there.

She said that over the years, when articles would come out, she would get a volunteer who wanted to help.

“Many helped with just one photo, however, I have about 12 volunteers who stayed with the project even when finishing their own state,” Hoehn said. “I call these volunteers ‘our team.’ They have been the most dedicated group of people, awesome to work with.”

“Many people have asked me how I could work on such a sad project,” she added. “My reply was always, my heart tells me to and even though it is very difficult to talk to some family members, I just cry with them and it all works out. The families are so grateful that there is someone out there that cares and wants to honor their loved one. It has been such a privilege to get to know our Gold Star Families and give their loved one the honor they deserve.”

While every name has a photo, the work is not exactly complete, Hoehn said.

“If anyone has a loved one, a friend, who died in Vietnam, I ask that you search his or her name on the Wall of Faces, look at the photo and if you have a better quality photo please contact me at this email address, [email protected],” she said.

For more information about the Wall of Faces, and to see the photos, people cam go to http://www.vvmf.org/thewall .