Lights shut down by Southern Oregon in home opener 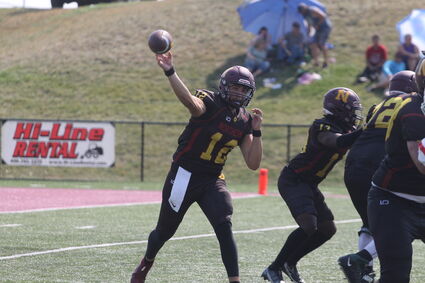 Northern quarterback Brenden Medina throws a pass against Southern Oregon University at Tilleman Field on Saturday afternoon. In their home opener, the Lights suffered a 56-6 loss to the Raiders to fall to 0-2 on the young season.

College football made its return to the Hi-Line on Saturday morning as the Montana State University-Northern football team held its home opener at Tilleman Field. In a contest against Southern Oregon University, both teams were looking to pick their first win of the young season. But in their first home game under head coach Jerome Souers, the Lights could not keep up with the Raiders as SOU raced out to a 56-6 victory.

"It's pretty disappointing," Souers said. "We're still on a journey, we're still building and we got to keep our heads high and keep grinding."

The SOU offense had a strong day against the MSU-N defense with 565 yards of offense. Starting quarterback Blake Asciutto completed 75 percent of his passes for 285 yards, four touchdowns and one pick. The Raiders also ran for 265 yards as a team with Champ Robertson leading the way with 117 yards on 13 yards a carry.

"We just have a lot of guys that are playing college football for the first time," Souers said about the offense. "We have to learn the hard lessons and that's what's happening now."

The first drive of the game demonstrated what kind of day it was going to be for the Lights. Asciutto completed a short pass to Adrik Lamar, who carried the ball for a 30-yard gain into MSU-N territory. Later on fourth and six, Asciutto connected with Jackson Clemmer for a 7-yard gain and a conversion.

The Lights had another shot at a stop as the Raiders were in a third and 15. But a screen pass to Christian Quira broke loose for a big gain and a first down. Asciutto then connected with Lamar again for a big gain to make it first and goal at the five. Ben Rash then ran the ball in for the touchdown to give SOU an early lead.

The Lights offense could not respond. After picking up a first down, Medina fumbled the ball on a sack and Ty Glumbick recovered for the Raiders. But the Raiders blew the opportunity as Asciutto's pass on the next play was intercepted by Hunter Riley.

The Lights could do nothing with the turnover as they punted the ball away. Asciutto continued to throw the ball short and let his receivers get yards after the catch as they moved the ball down the field again. The Raiders eventually worked their way to the MSU-N three-yard line, where on second and goal, Asciutto connected with Ben Graziani on a fade route in the left corner of the endzone for the score.

On the very next play for the Lights, Medina's pass down the right sideline was intercepted by Josiah Purchase. The Raiders continued to move the ball and a personal foul on the Lights helped put the ball at the MSU-N eight-yard line. The Lights tried to make a stand with the Raiders not scoring on three straight plays. But on fourth and goal at the five, Asciutto found Christian Grane down the middle for the score to push the lead to 21-0 early in the second quarter.

The game continued to follow a pattern. After a Lights three and out, the Raiders marched down the field to the goal line. On third and goal at the seven-yard line, Asciutto connected with Bryce Goggin on a fade route for the score.

On the next MSU-N possession, Cureton went into the game to play quarterback. But the result was another three and out for the Lights. Thankfully for the Lights, they caught a break when the Raiders muffed the punt and Cordell Langton recovered for the Lights in SOU territory. The Lights were able to pick up a first down but the offense stalled at the SOU 24-yard line. Kaden Nelson's 41-yard field goal fell short and the Lights remained scoreless in the game.

Two plays later, Asciutto connected with Lamar for a short pass that he took 74 yards down the left sideline for another score and a 35-0 lead late in the third quarter. He finished the game with four catches and 142 yards to lead the Raiders.

"Their perimeter had great speed and they made great moves," Souers said about the SOU wide receivers.

When they got the ball back, the Lights put together their best drive of the day. Cureton got it started with a 16-yard scramble for a first down. He then found Cannan Smith wide open down the right sideline for a 35 yard-gain to make it first and goal at the seven-yard line. Later on third and goal at the five, Cureton found Levi Keltner down the middle for a touchdown. While the two-point conversion failed, the Lights finally scored to make it 35-6 with second left in the half.

But the Lights could not carry that momentum into the second half. They had a strong drive to start the half, but they had to punt after stalling out in SOU territory. With the ball back, the Raiders ran the ball downfield on the Lights. On the drive, Robertson had carries of 22, 27 and 14 yards. The drive ended with Goggin taking a sweep for eight yards and a touchdown to increase the lead to 42-6.

After another MSU-N three and out, the Raiders inserted several of their backups. The Raiders were putting another drive together, but it ended with Levi Durrell throwing an interception to Aidan Hoyt. But the Lights again punted it away after three plays.

The Raiders continued to run the ball with the lead as their next drive ended with a one-yard touchdown run from Quira to push the lead to 49-6 late in the third. After another punt by the Lights, the SOU running game continued to milk the clock. A 15-yard run from Roberton capped off the next drive to make it 56-6 with just over eight minutes left in the contest. The Lights and Raiders went on to exchange drives to end the game.

The loss dropped the Lights to 0-2 in their first season under the leadership of Souers. The Lights are a young team so adversity like this will test them. With a bye week coming up before they get back on the field, Souers hopes to see his team learn and move on from these losses and put their best foot forward.

"Every week is a new week and the good part about college football is that the games are going to come and we're going to play them," Souers said. "This is some of the hardest things you do in athletics. You have to pick yourself off the ground, dust it off and stick your nose back in there. That's what we have to do."

The MSU-N football team will next play Montana Western at Tilleman Field on Sept. 17. 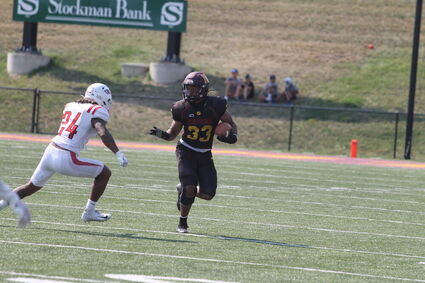