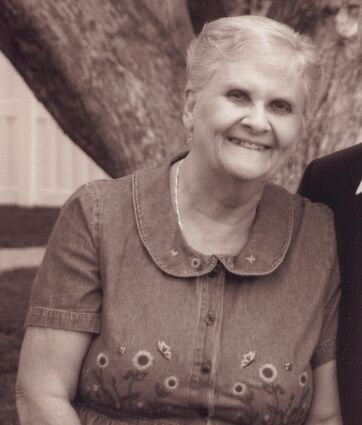 She was born Sunday, September 29, 1940, to Albert and Madeline (Romine) Dierkens in Kansas City, Missouri.

Being raised in the Belgian (East Bottoms) community was a joy and many life-long friendships made. Alberta graduated in 1957 from Cardinal Glennon High School. To help with tuition during high school, she worked at St. Joseph Hospital, and as a receptionist at Luce Manufacturing.

While working at the KC Board of Trade she met her lifelong love, Richard, who was serving in the Army Big Red 1 at Fort Riley, Kansas. They married November 15, 1958, and moved to the Langel Farm complex after Richard's active duty concluded. Alberta was an active farmwife working "Side-By-Side" (their song) with Richard. She drove the combine, hauled grain and had many tractor driving stories to tell. To keep up with the five kids and a foster child she drove the school district's route and activity buses.

Alberta was involved in the Hi-Line communities, becoming a certified Hill County first responder, a member of the Rudyard Jaycees, taught junior bowling, performed in community theater and played softball for the Rudyard Merchants. Continued studies at Northern Montana College enabled her to teach special education and music at the North Gilford Hutterite Colony.

As a member of Our Lady of Ransom Catholic Church in Hingham she was song leader, Eucharistic minister and teacher-director of the Confraternity of Christian Doctrine program. Service to her church continued as she was elected president of the Diocese Council of Catholic Women, then appointed by Bishop Anthony Milone as the Portland Province director, serving on the National Council of Catholic Women board and four years respectively on the boards of the Catholic Social Services of Montana and Montana Confraternity of Christian Doctrine.

After moving to Billings, Alberta worked at West Park Retirement Village. She enjoyed working within the community, serving on the board of directors for the Casa Village Residents Association as treasurer and president. Alberta was gifted at cooking, sewing and helping everyone.

Preceding her in death were her husband of 55 years, Richard; her sons, Albert and Timothy, her parents, Albert and Madeline; sister Regina and brother Henry; her godson, nephew Jeremy Fjeld, and many beloved in-laws.

Services will be held 10 a.m. Saturday, Sept. 10, 2022, at Our Lady of Ransom, 201 Second St., Hingham. Burial will follow at Rudyard Cemetery. A reception will follow at the Rudyard Catholic Youth Center.

Memorials can be made to a charity or organization of your choice.

Arrangements by Smith Funeral Chapel of Billings and Asper Funeral Homes of Chester.