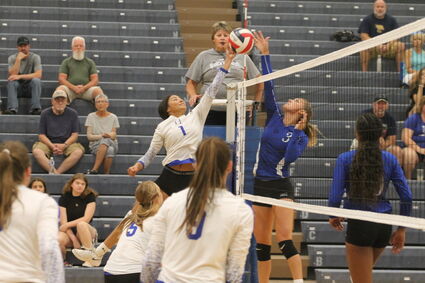 Havre's Kyanna Jarvis and Avery Carlson go for the ball at the blue/white scrimmage at Havre High Gymnasium last month. This past Saturday, the Havre High volleyball team opened its conference schedule with the match on the road against Sidney. The Blue Ponies won in three sets of 25-8, 25-9 and 25-7.

On the road Saturday afternoon, the Havre High volleyball team started its conference schedule with a match against Sidney on the road. After a strong season in the Northeast A last fall, the Blue Ponies hope to continue that dominant play this year. Well, the Ponies looked like they should be the cream of crop in the division once again as they defeated Sidney in three sets (25-8, 25-9, 25-7).

"I thought the girls did a really good job," HHS head coach Stephanie Huse said. "I think they came out with a really good mindset, attacked the match from the start and it just carried through the entire match."

Both teams came out strong early in the first set as the Ponies held a 7-6 lead. The Ponies then scored three straight points to put some cushion in their lead. After the Eagles scored to cut the deficit to 10-7, the Ponies took full control of the set with a 14-0 run to extend the lead to 24-7. After Sidney scored to end the run, the Ponies scored to win the set, 25-8, to take a 1-0 lead in the set.

Just like the first set, the second set saw the teams exchange points as the set was tied 4-4. The Ponies then found a rhythm with a 6-3 run to take a 10-7 lead in the set. Havre again put its foot to the pedal with an 11-0 run to stretch the lead to 21-7. The Eagles scored a couple of points late in the set, but the Ponies cruised to a 25-9 win in the set to give them a 2-0 lead in the match.

Volleyball is often described as a game of momentum and it seemed like the Ponies controlled it all the way through Saturday's match. While the Eagles threatened to take it away at certain points throughout the match, Stephanie Huse believes her team was determined to not let it go.

"It was just that mindset of just staying aggressive and being smart. The girls executed what we practiced all week," Huse said. "With those two things, I think we were just able to hold on and finish strong the whole match."

The Ponies came out strong in the third set as they jumped out to a 4-1 lead. After Sidney cut the deficit to 5-3, the Ponies had another long run with 11 straight points to push their lead to 15-3. The Eagles were able to break up the run, but the Ponies went on to win the set, 25-7, to sweep the match for their first conference win of the season.

While it was the first match that counted for the Ponies this fall, it was not their first competition. At the end of last month, the Ponies opened the year with the tipoff tournament in Lockwood. While the Ponies have lots to improve on, Huse was happy to see them improve their serving against Sidney.

"We didn't have as many service errors this weekend like we did at the tipoff, so seeing that improvement was good to see," Huse said. "I think everything still needs to be worked on. Every fundamental skill has to be challenged every day."

Havre starts the year 1-0 on the season and in the Northeast A. The Ponies will now look to replicate their play over the next two months of their season. While it will be a long road, Huse was just happy to finally get the season started.

"It's just fun to start our season. To get it going," Huse said. "Just beginning that foundation for the season was really important and good to see and we're just hoping to build on that and grow."

The HHS volleyball team will head out on another road trip this weekend. The Ponies will play Laurel Friday night at 7 p.m. and will then play at Miles City Saturday at 4 p.m.