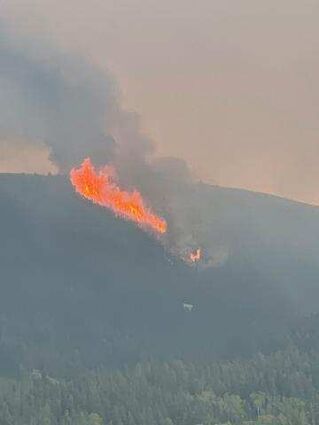 Flames are seen from a fire burning on Mount Baldy this afternoon.

A post on Bear Paw Ski Bowl's Facebook page about 6:10 p.m. reported that help was on the way to the fire in the Bear Paw Mountains.

Beaver Creek Park personnel said the park is on an evacuation notice due to the fire on Mount Baldy.

People on the park have not been ordered to evacuate yet, just a warning has been issued, but if the fire continues to move toward the park an evacuation could be started.

Information about the situation on Rocky Boy, and if evacuations were occurring, were not available to Havre Daily News at the time of this post.

Hill County DES Coordinator Amanda Frickel said they are putting out an advisory for people to stay off of Taylor Road from Beaver Creek Park to Rocky Boy's Indian Reservation due to the fire on Mount Baldy.

Frickel said she was en route to the scene and would update Havre Daily New as information became available.

Peterson said the gusty winds this afternoon were pushing the fire toward the park.

No additional details were available at the time of this post.